In The Outer Worlds, you will have to deal with many different factions, and for each of these factions you will earn reputation points. In today’s article, we will tell you what role reputation plays, what changes its level and why you need to pay attention to it at all.

What is reputation and what it is eaten with

First, we need to figure out with you, as a result of what actions the reputation of a particular faction changes. Faction reputation is usually positively influenced by the following:

In the first case, your reputation with factions may change during the course of the story, and not because of your actions. This is what the developers wanted, and you won’t do anything here. Now for the second, suppose that some member of the faction directly asked you for help, for example, to get an important item – your reputation with this faction will increase if you help its member. In general, everything is quite logical. 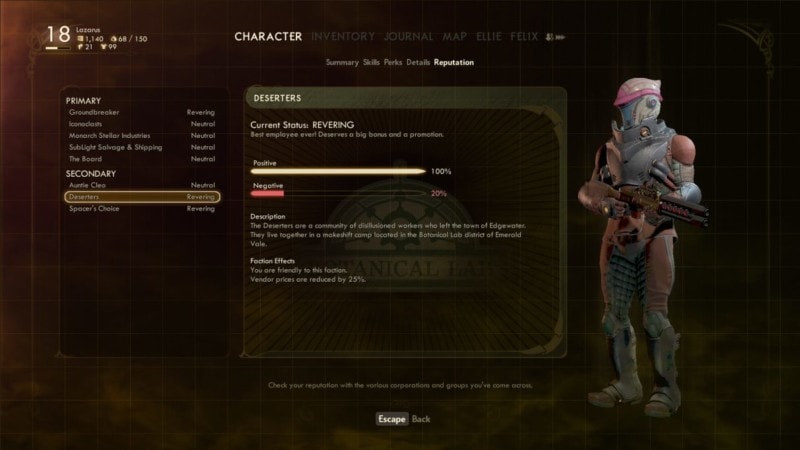 What actions, on the contrary, negatively affect the reputation?

Why you should care about your reputation

You probably have a very logical question: what do I really care about reputation? The fact is that reputation in The Outer Worlds is not just some arbitrary value that does not affect anything. Positive and negative faction reputations determine what bonuses and penalties the game will reward you with.

Upon reaching a certain level of reputation (+ and -), you will receive a new rank in the faction. There are four such levels in total – they are divided among themselves as follows:

To get a closer look at your reputation levels, go to the “Reputation” tab in your character’s menu. The main advantage of a high positive reputation level is discounts from merchants. The higher the level, the greater the discount.

Let’s now take a look at the table of bonuses and penalties for faction reputation with you:

After reading the sign, it becomes clear that you definitely do not want to raise your negative reputation above 29%, otherwise, then not the most pleasant penalties will come into play. Stick to a low negative and high positive reputation for the faction you want and you will be fine. Good luck with your diplomacy in The Outer Worlds!

How to defeat the Kraken in Sea Of Thieves?