Everything a newbie needs to know about Valheim and more

Valheim is a survival game set in Scandinavian mythology. Here gamers will have to explore a large open world, collect resources, hunt animals and fight monsters. This guide provides helpful tips to help you progress through the game.

Although you cannot die of hunger, you still need to eat regularly. Food temporarily increases the character’s maximum health. HP growth depends on the type of food and its variety. You can eat a maximum of 3 meals in total. Moreover, they cannot be the same. 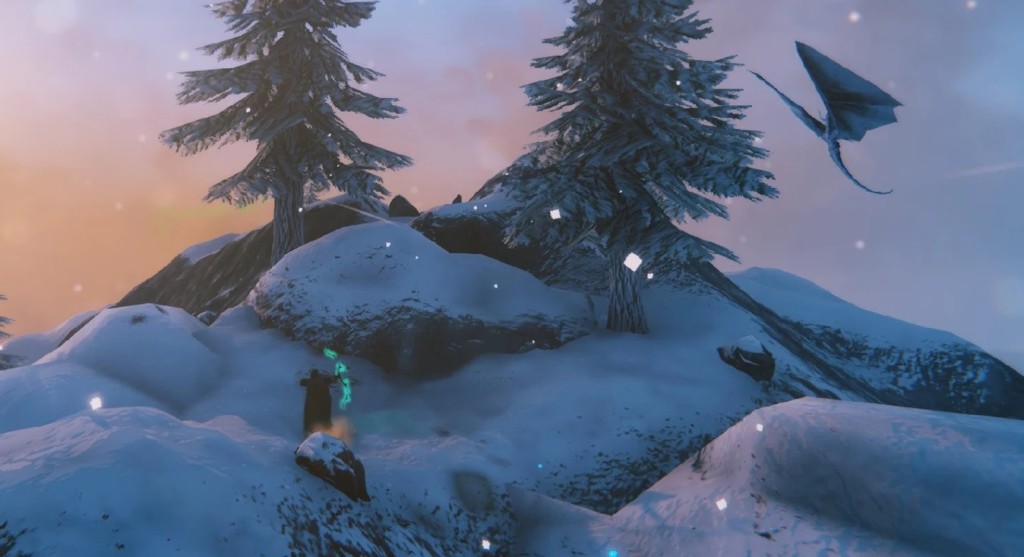 Beware of clusters of animals and creatures

While exploring the map, you can meet many different enemies. The further you go from the starting point, the more dangerous the opponents. Therefore, you should never be self-confident, look around, because even a simple tree can kill you. At the initial stage, not having good weapons and armor, it is better to bypass most of the creatures.

Another interesting feature is that enemies and animals cannot spawn in the area of ​​the workbench and fire. This can be used to protect, for example, the interior of a settlement surrounded by a picket fence.

Collect absolutely everything that you can find, since many recipes are unlocked only after all the components are available for their production. Therefore, even if some items seem useless to you, collect them and put them in the chest until better times.

After defeating any boss, you get a trophy. It can be placed on the altar at which the game began. Thus, access to special abilities opens up that will temporarily improve the characteristics of the hero and his comrades if you participate in a co-op. Only one skill is assigned to a character, but it can be changed at the same altar. 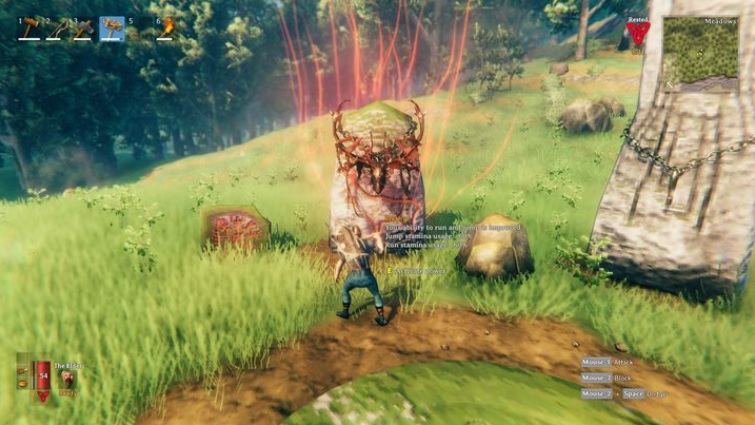 Monitor the sustainability of buildings

By placing individual elements of the building, they change their stability. You can define this with the help of colors.

In addition to the rather bright, but not entirely intuitive color system, in Walheim it is also very easy to “calculate” the overall stability of the structure. The following rules apply to wooden elements: a maximum of 7 components can be connected vertically (the eighth will fall apart). Parts located perpendicularly can be removed from the foundation by about 7-9 units. The length of the fragments does not matter here – only their number.

Stone elements behave the same way as wooden ones, with one exception. Such segments attached to stone are considered to be installed on the foundation. This means that with this foundation it is possible to build at least twice as tall buildings. It should also be borne in mind that diagonal support beams do not increase the stability of the structure. In most cases, it does not matter if the floor / roof is supported by a beam emanating from the same element as these components. 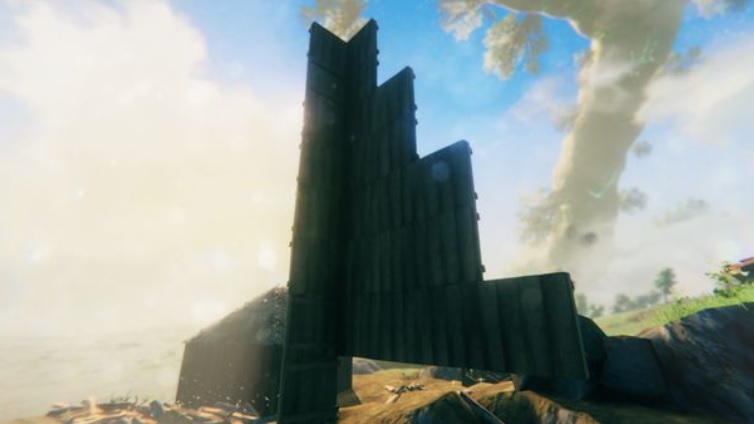 Don’t forget to fix your equipment

When using the tool, it gradually wears out (this can be seen by the status bar under the object). When the durability drops to 0, it cannot be used. Therefore, when planning to go on a long hike, you should fix all the equipment that you take with you. In addition, repairs do not require additional resources.

After collecting resources that do not require tools to mine, you should think about making tools, as this will significantly speed up the extraction.

Make the trolls mine resources for you

The troll is one of the most powerful enemies, he can kill the hero with two accurate hits. However, its power can be used to fell trees and mine metals. It is necessary to bring him to the right place and provoke him to attack. 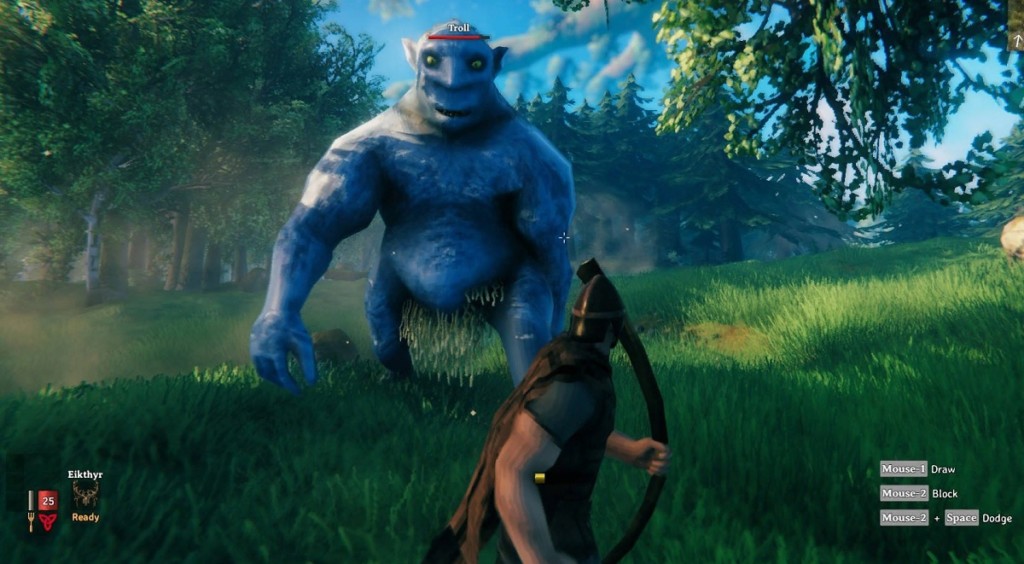 The best place to build your first hideout is the starting area of ​​the Meadow, as it is the safest and most welcoming biome in Walheim. The territory of the meadows is covered with grass, different types of trees grow here (beech, birch, oak), and at every step you can meet animals that will provide raw meat.

To build a basic shelter, you will need: a workbench, a hoe, a hammer, about 130-150 wooden planks and at least 5 stones (for a fire). All of these resources can be easily collected within the first day. There are also many abandoned and dilapidated buildings that can be cheaper to repair in terms of component costs. If during construction any element was placed in the wrong place, it can always be destroyed by returning all resources. To do this, you need to select a hammer and press RMB on the subject.

Making a fire near the dwelling

Since making a fire in the house will lead to smoke and death of the character, you need to build a chimney or create holes to ventilate the room. However, initially, the best option would be to make a fire outside by the wall with the bed next to it. This will add an extra level of comfort. 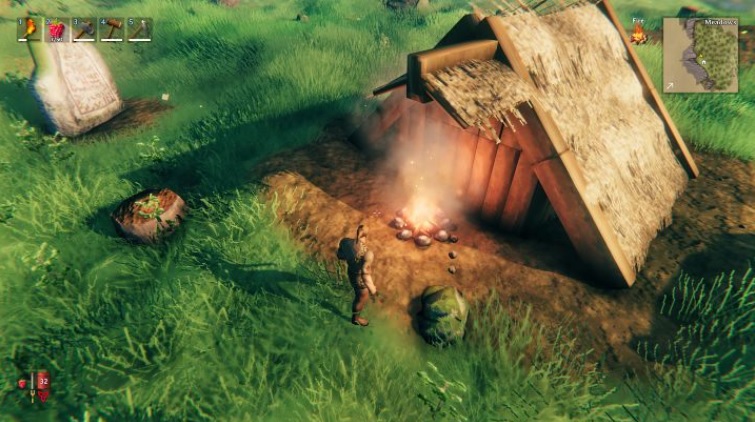 Comfort level and its increase

The level of comfort a character is in affects the bonus received after rest. By default, the buff lasts 7 minutes, increasing health and stamina regeneration. Each comfort level increases the duration of this effect by 1 minute. As of this writing, the maximum convenience value is 17, so the bonus duration can be extended to 24 minutes.

The main items that affect comfort include fire and shelter (walls to keep out the wind and a roof to keep out rain). In addition, placing furniture and other elements in the house increases the acceptable level.

Connection timed out in Genshin Impact on PS4: why, how to fix