In The Last of Us 2, players can use workbenches to customize their weapons. Obviously, modding guns requires special details that can be found as you progress through the game itself. By the way, there are as many as twenty-five workbenches in The Last of Us 2 – and we will tell you where they are all located! 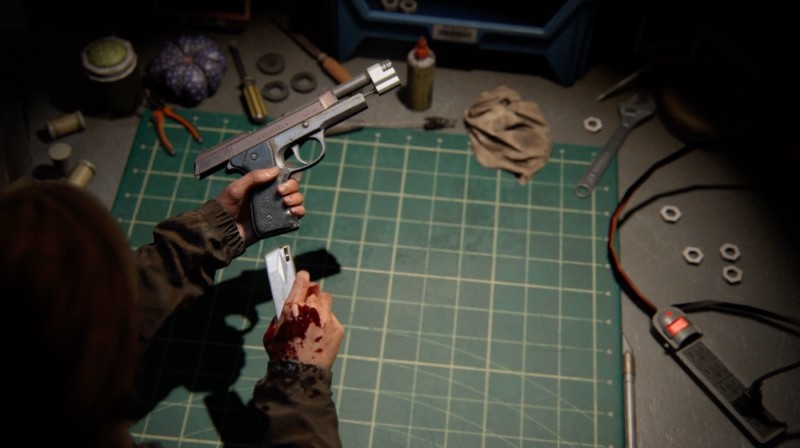 The first workbench is literally impossible to miss as it is part of the game’s learning curve It will be illuminated by a table lamp, Dina will note that it can be used to modify weapons and so on. In general, it couldn’t be easier. As soon as you start the generator in the library, turn the camera to the left – BOOM! There are no more workbenches in Jackson, so we go to Seattle.

The second workbench can be found in the small FERDA camp, which is located at the intersection of Marion Street and Fifth Avenue. Drive past the Valiant Music Shop and you should see the tents and barbed wire fence. Climb through the half-open gate and go to the first tent. To the right of the entrance to the tent there will be a workbench.

Find the Nancy Gift Shop (a building with purple awnings). Go around it on the right side and continue along the road until you reach a gas station. Crawl under the semi-closed shutters of the auto repair shop and turn the camera to the right to see the workbench.

The search for the fourth workbench will begin when you see the building of the school of martial arts (Martial Arts). Enter this building through the front door. Go inland, past the cigarette machine and turn left (in front of the notice board). A few more meters and you will see a door jamb, and behind it, in the next room, there will be a workbench.

Wandering through the dark tunnels, you stumble upon the corpse of a man in a gas mask, which is hanging on the grate. There will even be a dialogue between Ellie and Dina about this. Move from the corpse to the right and look on the left side for the stairs leading up. Climb up it, and then go through the doors, which will be at the barrels and cylinders on the right. There is a workbench in this service area.

As soon as you find yourself in Hillcrest after the cutscene, immediately go to the building with large windows on your right. There is still a white van next to it. Further move deeper into the building, past the mannequins, and get to the table with the computer. To the left of the computer you will see a huge hole in the wall – climb into it. Then turn around 180 degrees and you will see another workbench.

So you climbed (with the help of a trash can on wheels, by the way) to the garage of the workshop of the bike shop – jump into the giant hole. Walk a few meters forward – the workbench is in front of you. It is extremely hard to miss, the obviousness is almost at the level of the very first workbench.

Get to the moment with the sign of the fifth route and the transition between the two buildings, under which a bunch of cars, including a garbage truck, have accumulated. Go through this passage and move to the building on the left side, next to which there is a sign “For sale”. Climb onto the roof of the nearest truck and jump from it to the shed of the building with a sign. Jump into the open window, then go to the apartment on the left. The workbench can be found in the very depths of the apartment, in the kitchen.

Find Weston’s Pharmacy and enter through its front door. On the left, between the two shelves, you will see a hole in the wall – climb there. The ninth workbench will be located in this small room.

10 workbench (Seattle. Day three. The way to the aquarium)

You need to find an arched passage with a bunch of cars. Look for the “WPL” sign in this passage. Climb through the hole in the door of this establishment. As soon as you enter inside, immediately pass through the following doors, over which a clock hangs, and then turn left and go until you find doors on the right, piled up with some kind of cabinet. In this room you will find a workbench.

11 workbench (Seattle. Day three. The way to the aquarium)

After a short swim, you will find yourself under the passage between two buildings on the second floor. Come out onto dry land and head into the building to your left. Climb up the destroyed floor slabs and look out for a couple of mannequins (one without a head). Turn left and follow the rest of the mannequins. Here you have to get out into a room with a water cooler, several tables and a board. The workbench is one of the tables.

During the boat trip, you will have to stumble upon a warehouse with the interesting name Seattle Sleep Warehouse. From the sign with the name of the warehouse, swim to the left until you hit the bank in front of the passage, which is signed as “Shaftway”. As soon as you enter the building, you will immediately see a workbench.

We float through the flooded parking lot, low ceiling. Swim until you reach the arcade establishment (red building). In this place, in order to go further in the story, you will have to open the gate. Turn around 180 degrees and use the stairs to go up to the second floor. Here, among the heap of slot machines, you will find the 13th workbench.

Get to the point where Abby will hook Manny to the hanging wire. Climb to the roof of the building and use the same cable to go down through the zenith window into the building itself. Go through the exit (there will be a corresponding sign above the doors) and go a little deeper into the structure, behind the stairs to the second floor. The workbench will sit next to the refrigerator and a small fan.

15 workbench (Seattle. Day one. Forward base)

You got to the base and checked in at the entrance. Walk a couple of meters forward and turn the camera to the left, go inside the very first tent in this direction. Identifying the workbench would be pretty damn easy.

The search for the sixteenth workbench will begin after the end of the cutscene, in which Abby will notice the Ferris wheel in the distance. Turn left and go to the next room behind the “Fresnel” counter, to the left of the image of the prophet on the wall. The workbench will be behind the fireplace.

The starting point is the auto parts store / auto repair shop “La Rosa”. Where Abby and Lion will raise the appropriately named gate. The room is rather tiny, and therefore you almost immediately run into a workbench.

Upon entering the warehouse, you should see a crane with a container vertically attached to it. Turn around 180 degrees to reveal the WPL sign. Walk around the building with this sign on the left and enter the only doors. The workbench will be under your nose.

You need to find the “Interbay” (red building). Before him you will have to jump a little on the platforms from the pieces of the road, but you can handle it. As soon as you enter the building through the front entrance, immediately turn left and walk until you run into a workbench.

The twentieth workbench will be located in the Scars territory. As soon as you climb the wooden stairs installed in the elevator shaft, you will see the image of the prophet, which was painted on three windows. Go through the doors to the right of this image, into a room with another wooden staircase. There will be a workbench behind this ladder.

Go to the quarantined part of the hospital (Abby will enter through the yellow doors and put on a gas mask). Move along the corridors until you find the Surgery Department. Squeeze through the half-open doors, then turn right, and then enter the third doors on the left. In that room you will see a huge hole in the wall with a pipe – climb into this hole. Jumping out of the hole, immediately turn into the open doors to the left. The workbench will be at the end of the room.

Head inland as soon as Abby and Yara get off the boat. At some point, you will bump into a cliff, behind which you can see a bunch of triangular buildings on the other side. Turn around 180 degrees and the clock tower will stand behind you. Go up to the clock tower and behind it you will see a triangular wooden building. There will be a workbench in the back of the building.

Abby will hoist the Lion so that she can reach the stairs on the brick building. Climb the short stairs and climb into the open window on the right. As soon as you land on your feet, a workbench will appear in front of you. You can only skip it on purpose.

Ellie will reach the tiled roof mansion. Walk around the mansion on the left side, climb to the roof using the car standing there, and go inside using the window with a red rag sticking out of it. Go down to the first floor of the mansion and go to the kitchen. The workbench will be one of the tables.

You are interested in the place where a couple of rattlers teased a zombie runner, not far from the entrance to the camp of these same rattlers, a low wooden building. Given the size of the house (and the fact that many walls are missing), you should have no difficulty finding a workbench.