After playing The Last of Us 2 for the first time, many players would probably want to play it again. Fortunately, the developers have foreseen this moment by including in their creation “New Game +” – a special mode that allows you to replay all the story missions of the game without losing the previously received weapons and equipment. Believe me, in this mode, replaying the game is much more interesting than just starting all over again.

“New Game +” is opened for the player after completing The Last of Us 2 on any available difficulty. Simply put, this mode will open for you even if you completed the game on the lowest difficulty, and this, by the way, is not done by all developers. As soon as you get to the end credits, you will see the following message: 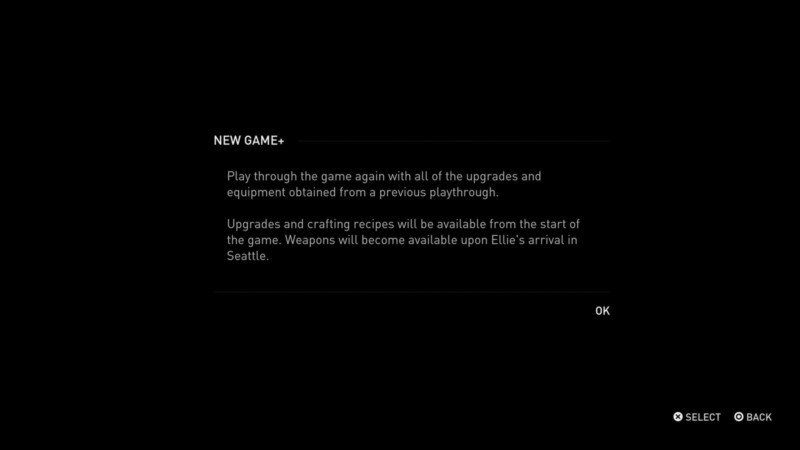 Returning to the main menu of the game, you will notice that now the first line is not the item “New game”, but “New game +”.

What is the essence of the New Game + mode in The Last of Us 2?

Weapons, equipment, upgrades, skills, mods and collectibles will all remain in place when you launch the game in New Game +. An important point from the message: all previously obtained weapons will be available only when Ellie arrives in Seattle. Therefore, do not worry at the very beginning and do not think that something went wrong and the game broke.

Also, it’s important to remember that the difficulty increases significantly in New Game +. Hearing mode? He’s gone. Resources? Now there are very few of them. You even have the ability to activate permanent death, which we really don’t recommend most players do, but if you want – go for it. Fortunately, the weapons and equipment available almost from the very beginning to some extent compensate for the increased complexity.

Besides hardcore fans, who else will benefit from New Game +? The answer is for people who could not collect all the collectibles, i.e. cards, coins and more. Therefore, if you do not want to bother with collecting collectibles on your first playthrough, do not. It should also be noted that in “New Game +” you have the opportunity to use cheats to get endless ammunition, materials for creating consumable equipment and much more.