Subway Surfers offers simple yet addicting gameplay with colorful decorations. A version in Russian is available. During the escape, you will have to collect various keys and coins, in the future they can be spent. However, it is not at all necessary to play and collect items for a long time in the hope of getting a bonus. If you put the hacked Subway Surfers, you can get a lot of keys, money and all the characters at once. We will analyze the features of downloading and installing the original version and Subway Surfers with a hack, as well as tell you about useful tricks during the passage.

Subway Surfers is a mobile game in the so-called runner genre. It is available on devices with iOS and Android operating systems. One of the most popular games in its genre from the teams Kiloo and SYBO Games invites you to go for a run to collect gold. During the journey, the reaction is vital, as there are various obstacles around, any of which can prevent you from moving further along the path. 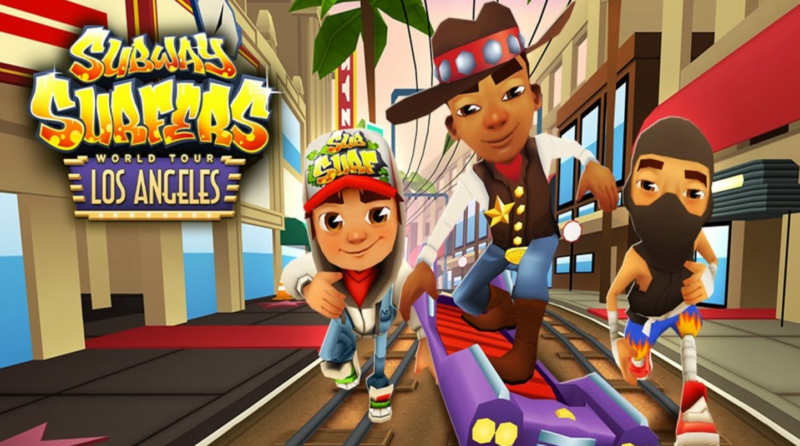 The plot of the game – a cartoon character made graffiti on a subway car, he was caught, and an inspector with a dog rushed in pursuit. This is where the user comes into play, trying to run away from the pursuer along the railroad tracks as far as possible. The difficulty lies in overcoming obstacles, otherwise the inspector will catch up with the bully. As you progress, the hero’s speed will increase, as will the difficulty of the game.

By gradually collecting gold coins and other bonuses, access to additional opportunities appears. Plus, the reward can be increased if you complete the mission, which consists of 3 tasks. After reaching each goal, a score multiplier appears, so it’s easier to set new records. As soon as 90 missions are completed, the multiplier will become maximum and gold boxes will begin to drop out. You can pay for skipping a mission in gold.

There are also daily tasks, a lot of cards, season goals. Developers regularly release updates (usually once a month) so that there is no time for boredom.

Here’s what will help you play Subway Surfers for free and absolutely officially, while getting a significant advantage:

The first step is to download Subway Surfers, and then install it. We’ll cover both steps for different platforms.

Subway Surfers can be downloaded on Android either from an official source (Google Play) or from a third-party. In the first case, all interaction with the game files occurs through the application store, and in the second, the Subway Surfers apk file is needed.

How to install Subway Surfers on Android:

Unfortunately, you won’t be able to install Subway Surfers hack in this way. A much more flexible way is to use an apk file. It can even be modified.

How to install Subway Surfers mod:

The game can be downloaded to a computer in two ways too, now we will consider both: a simpler and more complex one.

The disadvantage of this method is that not all clicks are processed correctly. For some users, the game does not respond to keys. Another problem is that there is no way to get achievements, since the game is not synchronized with your Play Market account.

How to install Subway Surfers on a computer via an emulator:

The second option allows you to get a more stable version of the game.