How do I fix the LUA error in World of Warcraft? 5 simple methods

Many World of Warcraft players complain about LUA errors appearing when starting the game. These errors usually indicate that some of the add-ons are not working correctly. Errors do not interfere with the gameplay, however, their constant appearance in the chat box can be pretty annoying. Windows 7, 8 and 10 – these errors affect users of all modern versions of Microsoft OS.

Before we move on, it’s important to understand what LUA is and what it is eaten with.

LUA is a scripting programming language that brings modularity to a wide variety of applications through embedding. LUA is a favorite language of the WoW modding community because it is relatively easy to learn and can be used to create truly impressive mods.

Having studied the problem more closely, we came to the conclusion that LUA errors in World of Warcraft can occur for the following reasons:

How to fix the LUA error in World of Warcraft 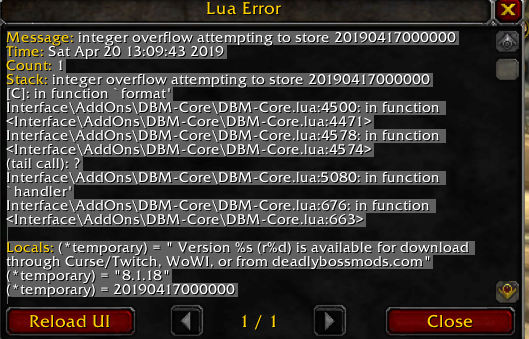 If the error occurred as a result of a bug or a situation where not all add-ons were loaded with WoW, you should easily get rid of it by restarting the interface using the console command. However, you should immediately warn that the error is almost certainly a symptom of some other problem, for example, an outdated add-on that refuses to work normally with the current WoW build.

So, to reload the WoW interface, you just need to open the game chat (chat box) and execute the following command in it:

The note: this method does not work on the most recent versions of WoW, however it should work on the vanilla version.

If a simple reboot of the interface did not fix the LUA error, then we recommend doing a complete reset of the WoW interface in order to get rid of all unnecessary code that could have remained in your game from a previously removed addon or addon manager.

It is also very important to get rid of the addon manager you are currently using (!) And addon files located in the three main WoW folders.

Check if the LUA error has stopped appearing or not.

Rebooting / resetting the main interface didn’t have the desired effect? Then you should try resetting all the WoW custom console variables. This procedure will only work if you have previously installed and played with addons that had parameters that could potentially conflict with each other.

Method # 4 Removing the Cartographer addon (or any other obsolete addon)

It turns out that LUA errors can be obtained if you run WoW with outdated addons that can no longer work with the current version of the game. You need to get rid of all outdated add-ons, then go back to the game and check if the problem has been resolved. I would like to note right away that each add-on is removed in a different way, and therefore we will not be able to help you with the uninstallation process. Interesting fact: LUA errors are often caused by the Cartographer addon.

If you are unable to get rid of annoying LUA errors (or you cannot determine the reason for their appearance), then we recommend not to bother and simply turn off the messages about them. This is done as follows:

After that, you are guaranteed to stop seeing LUA errors. Run the / console scriptErrors 1 command to reactivate the error message display feature.

what is this code and how to fix it