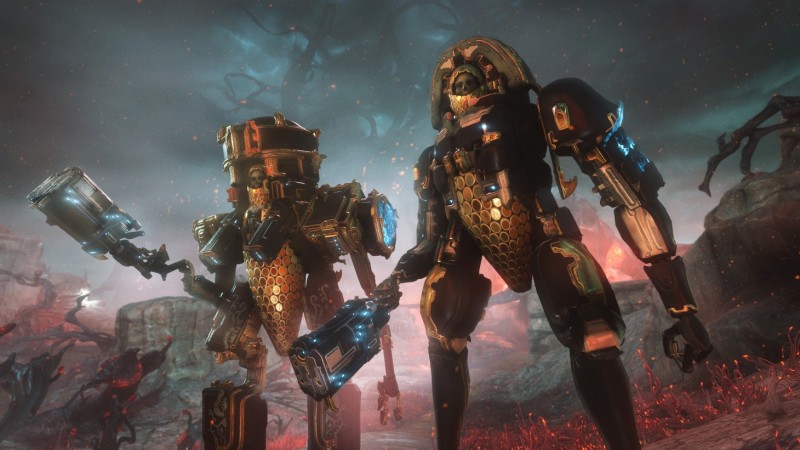 The Nekramechs were introduced in the Heart of Deimos update to Warframe. These mechanical monsters patrol the Isolation Chambers, guarding the treasures and valuable information hidden there. In addition, after death from the remains of Nekramech the guardian, you can get the resources necessary to create your own Nekramech. For some players, fighting this type of mech is a daunting task. But as with any enemy, the main key to victory is understanding the enemy and his abilities.

The basics of fighting Nekramech

Superbly armored heavy vehicles are practically immune to any attacks made on the hull. The Nekramechs’ only vulnerable spots are their shoulders and a blue-glowing rip in their back. By inflicting enough damage to each shoulder, you can destroy both arms of the enemy, thereby significantly reducing his ability to cause damage. Then it remains only to attack his weak point. But you need to act quickly, since Nekramech has the ability to gradually restore damaged limbs, besides, even without hands, he can still use his abilities.

When fighting Nekramech, it is important to know when to stop attacking. His ability called “Storm Shroud” is similar in effect to the “Iron Skin” of Reno’s warframe. However, it not only absorbs incoming damage, but then turns it into a reflective barrier. When Storm Cover is active, it is best to stop attacking close and move back to a safe distance to clear the barrier with your weapon.

What weapon is most effective against Nekramech

To kill the enemy, you need a weapon with high penetrating power, then, when fired into the chest, the charge will be able to pass through the body and hit a vulnerable spot on the back.

Among the most suitable weapons are the Stanza. Designed for powerful attacks, the Stanza will pierce Nekramech’s chest, after which he can be finished off with a strong attack to the weak spot of the shoulder. If you accumulate enough combo counter points, the damage will spread to the main health of the enemy and destroy it.

High power sniper rifles will also be effective, although much less useful during the rest of the Isolation Chambers. Ideally, the weapon should be modified to deal damage with Radiation, Explosion and Impact, which will allow you to quickly deal with the enemy’s shield.

Another common option that many players say is great for fighting the Nekramechs is the Nykor Kuva streaming weapon.

Which warframe to use

There are many suitable warframes for fighting the Nekramechs. Chroma is capable of dealing heavy damage, Harrow can easily shatter the Storm Cover, and Wukong can use his defensive abilities to survive an attack and deliver a devastating retaliation.

Our favorite is Nyx, armed with the Stanza. For a guaranteed victory, simply fill up your combo meter by dealing with weaker enemies, use the Absorb skill to completely ignore the damage that Nekramech can inflict, and then critically attack the weak spot. Nyx can also additionally apply a debuff to an enemy using his second ability.