how to effectively play as Odyssey

Perhaps playing as Odyssey is much, much more difficult than playing any other hero in Total War Saga: Troy. This character has a terrible starting position, and territories that are not near the sea become almost useless due to his special gameplay mechanics. Simply put, for a beginner player, Odysseus can turn into a real nightmare. But all these complications make the Odyssey campaign one of the most interesting in the entire Total War Saga: Troy.

The first feature of this hero is that in regions that are not by the sea, only the main buildings can be upgraded. Therefore, it is not advisable to thoughtlessly capture everything that comes to your hand. Better focus on winning the Homer for your character: complete epic missions, and in the end – infiltrate Troy with the help of the legendary Trojan horse. If you prefer to enter into an alliance with the Greeks, then be sure to choose those who are by the sea.

However, do you know what is the main strategic advantage of Odyssey? As this hero, you will have access to spies that you can – and should – send to Troy itself! Of course, first they will have to go through the coastal territories and islands of Greece. After reaching the famous fortress, spies can create special shelters, thanks to which you can replenish the soldiers of your army without having the necessary territory for this. With a good preparation in advance, the siege of Troy will not be difficult. 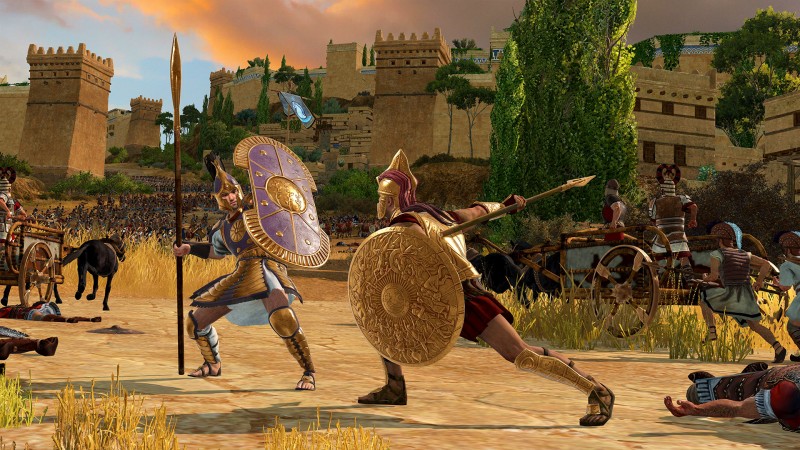 How it all starts …

Kefalonia is the starting position for Odysseus. Even Total War Saga: Troy itself will tell the player that this position is extremely “difficult”. Why? Firstly, it is not clear in which direction it is worth moving, at least at the beginning. Secondly, you will be harassed by nearby TV shows. Thirdly, Troy, the main goal of the story campaign, is at the maximum possible distance from your hero.

Here’s what we recommend you do at the very beginning:

Everything, with the most difficult, initial stage is over. Now you can move in whatever direction you want. Given the peculiarities of the gameplay mechanics of Odyssey, it makes no sense to go inland. Better go southwest towards the coastal areas. Alternatively, you can try to take control of the Aegean Islands, which have tons of resources.

As we already mentioned, Odysseus has spies at his disposal. These units can build shelters on the territory of foreign settlements. This will give you the opportunity to recruit fighters for your army, while being close to the enemy. Such shelters will serve as excellent support before some kind of large-scale battles. Who can be hired is determined by the spies themselves – melee or ranged fighters.

Odysseus is able to build unique buildings on coastal territories, but if there is no water nearby, the player will be able to build and improve only the main buildings.

The special units of the army of Odysseus include:

For Odyssey you will not be able to hire defender class heroes for your army.

To achieve the coveted Homer victory playing as Odyssey in Total War Saga: Troy, you need to do the following: