How to get Excalibur in Assassin’s Creed Valhalla

The Pieces of Eden are the most powerful weapons in the Assassin’s Creed series, and one such particle is the Excalibur sword, also known as the sword of King Arthur. In order to become the owner of this legendary two-handed sword, you will first have to collect 11 mysterious tablets. Eight tablets are hidden underground in England, three more tablets are kept by the powerful fanatics of the Order of the Ancients. 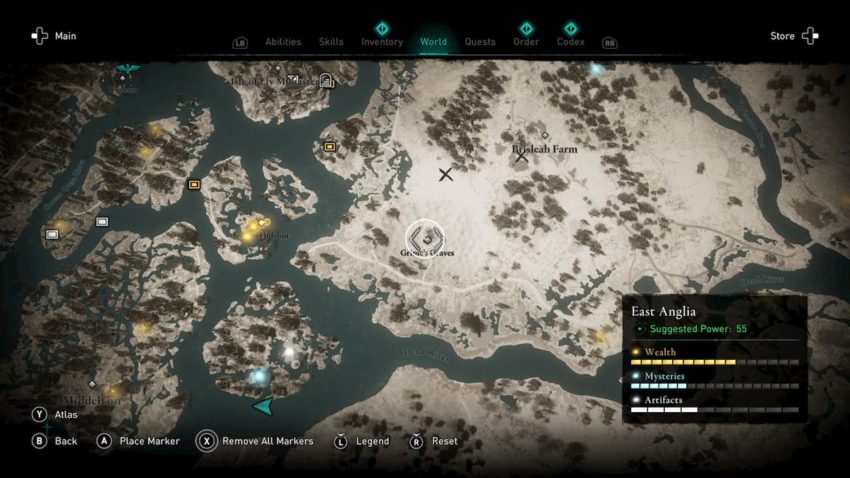 Britain’s first treasure can be found in Grime Graves, in the west of East Anglia. This location is south of Brisley’s farm. You need to jump into the cave, get to its end and break the vase on the table to pick up the tablet. 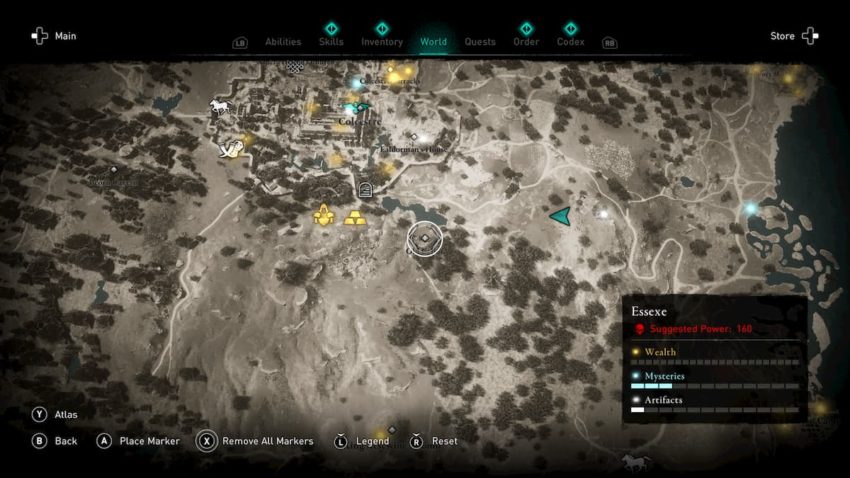 The Old Cellar is a location in Essex, south of Colchester. Upon reaching the end of the cave, you will find yourself in a wine cellar. Use your bow to shoot the caps on the wine barrels to fill the well and pop up the sign. 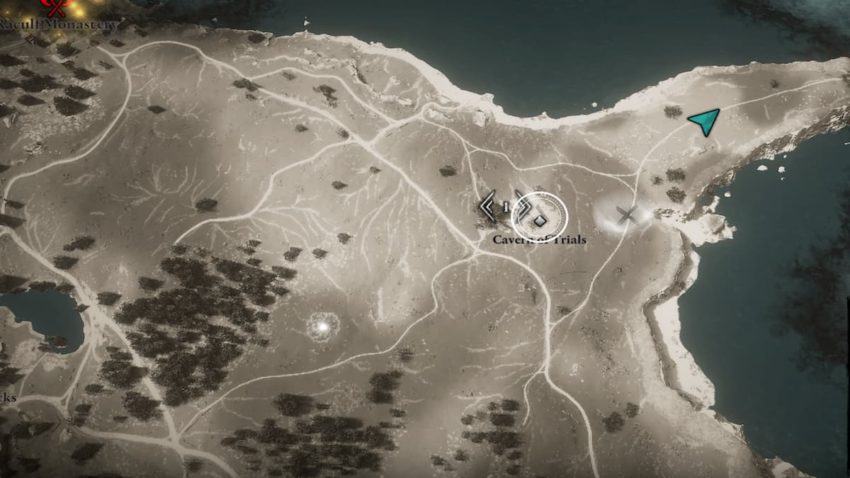 You can find the Challenge Cave east of Canterbury, in an abandoned house. On your way to the treasure, you will first need to use your parkour skills to get four different keys inside the cave. After that, you have to go through a puzzle with a moving stone, in which you will need to place the stones in the correct places in order to climb over the stalagmites and get to the area with the sign. 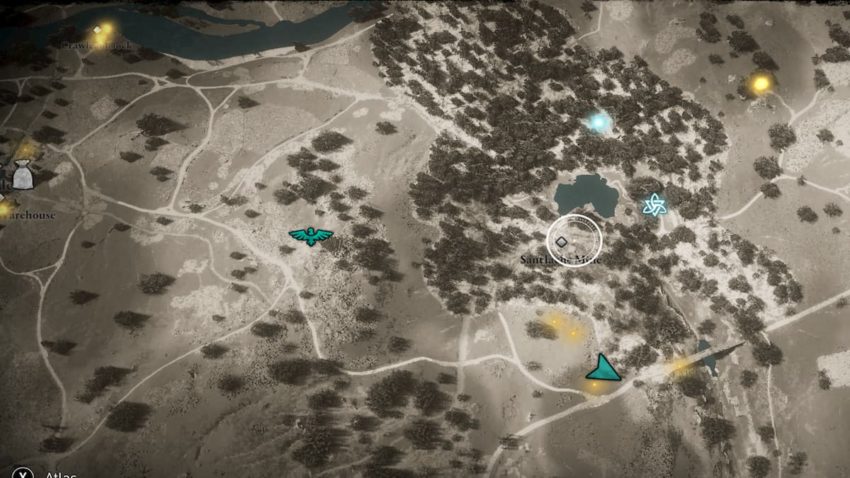 The Santlach Mine in Sussex is another dark cave adventure. Enter the mine and destroy the stone wall with the oil jug. From the room with the waterwheel to the place where the plaque is stored, you will have to swim underwater. 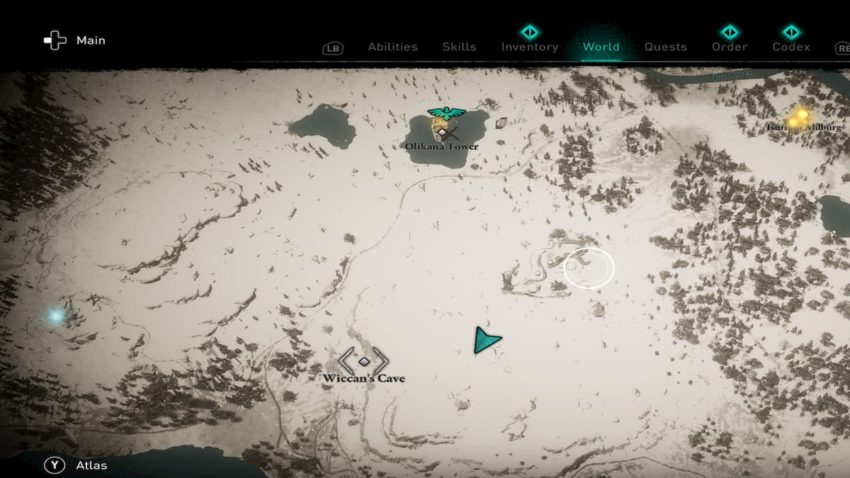 Britain’s next treasure lies in the Wiccan Cave, which is located south of the Olikana Tower in Eurviskire. When you enter the cave, go through the first room and get over to the other side. If you are having difficulty climbing rocks, try to climb only near rocky areas, as Eyvor cannot climb ice walls.

After reaching the other end, keep moving until you reach a small location where there is a note about the witch’s curse. Here you need to find a fragile ice wall. Destroy it with your bow and you will be taken to a hidden area. First, break down the doors on the right, then shoot an arrow at the oil jug inside the house. The explosion will destroy the stone wall on the other side, allowing you to aim and knock the lock off the door. Opening the door, you will gain access to the next plate. 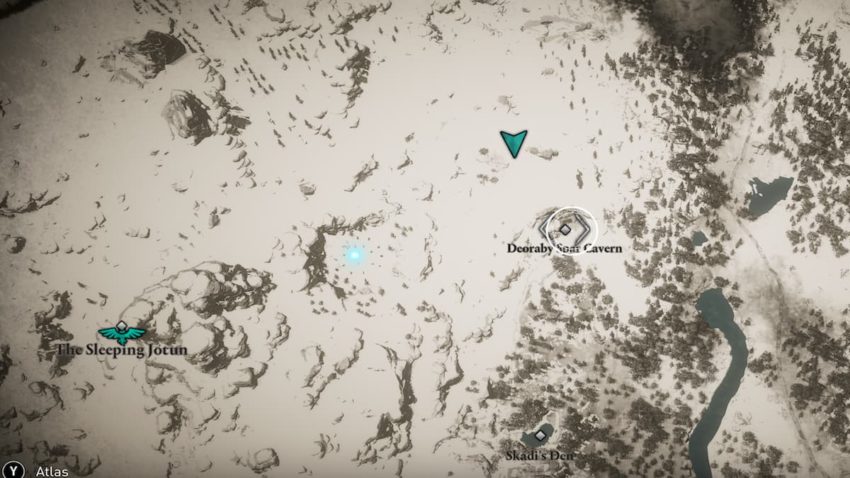 Deorabi Spar Cave is slightly faster to traverse than other British treasure caves. It is located in the northern part of Snottinghamshire. Go through the crack in the wall and open the door with the key on the table. Further, you do not need to solve any difficult puzzles on your part. All you have to do is use your climbing skills and get to the other side of the cave. You will find a tablet on the stone altar. 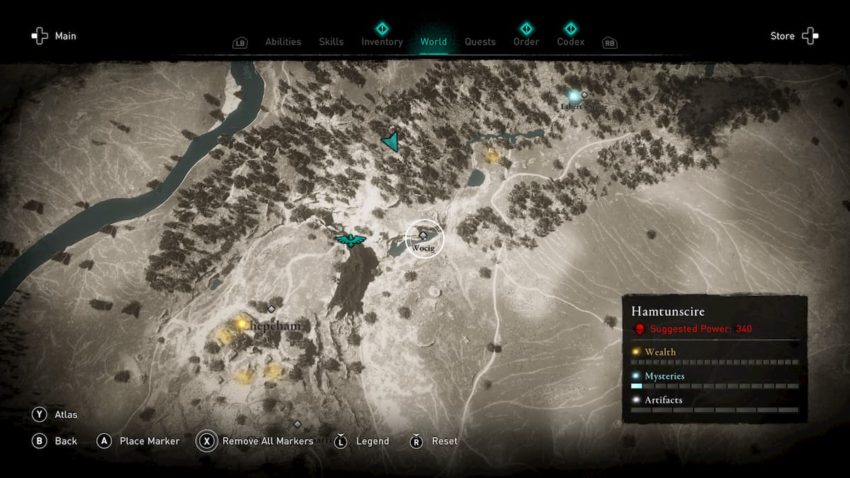 Wozig Cave is located northeast of Chepcham, next to the fast travel point on the map. Inside the cave, use the boat to cross the water. When you come to a place where the boat cannot move further, look to the right. There will be a wall marked with white paint. Climb up it and follow straight until you see a metal gate blocking the passage to the sign. Turn left, here you need to go through the room where there are cans of oil. Destroy them from a safe distance, or smash them in the dark without a torch, clearing the way to the sign. 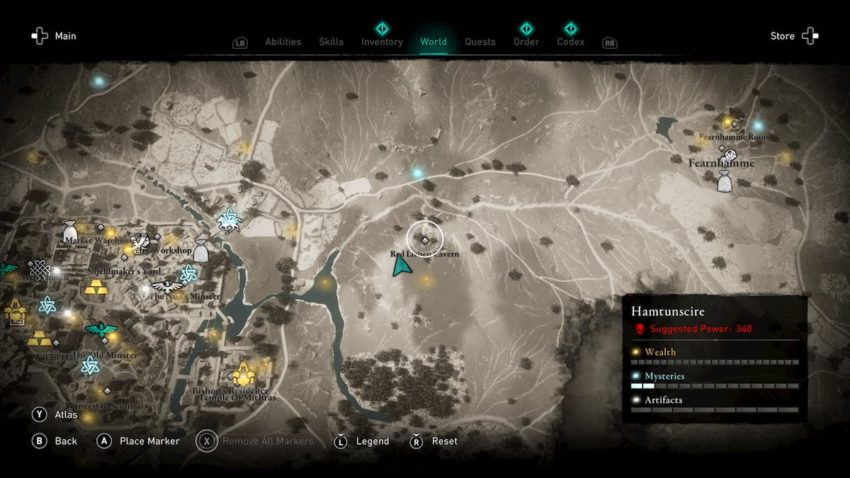 You can reach the entrance to this place by walking east from Winchester. As in many other caves, you don’t have to rack your brains too much here. You will know that you are on the right track by the green, toxic fumes coming out of the cracks in the walls. When you enter the room where the sign is, take out the torch and throw it into the cloud of vapor. The gas will explode, giving you a little time to make your way through the cave and grab the sign at the top. 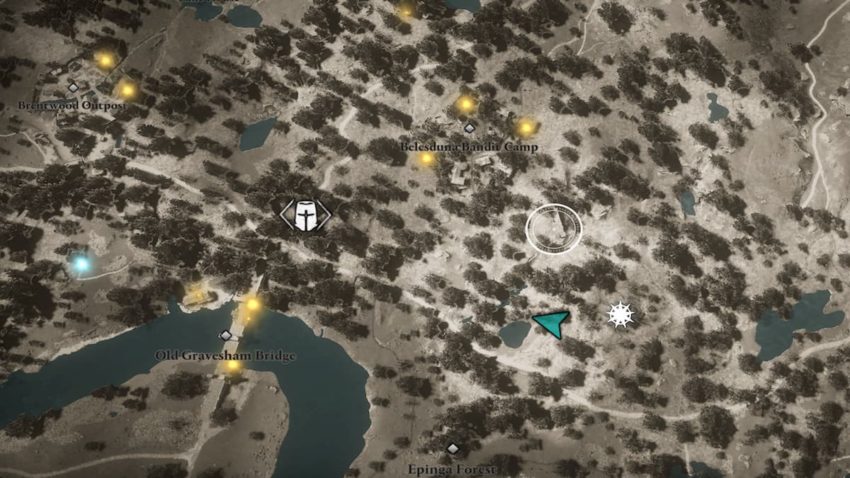 Now that you have found all the tablets hidden in the caves, your next task is to fight the three fanatics who own the remaining tablets. The first of them, Heike, has a power level of 250 units, so a tough battle awaits you ahead. He patrols the roads in the western part of Essex. Heike is armed with a spear, sword and shield, uses poison on weapons and is able to heal during battle. 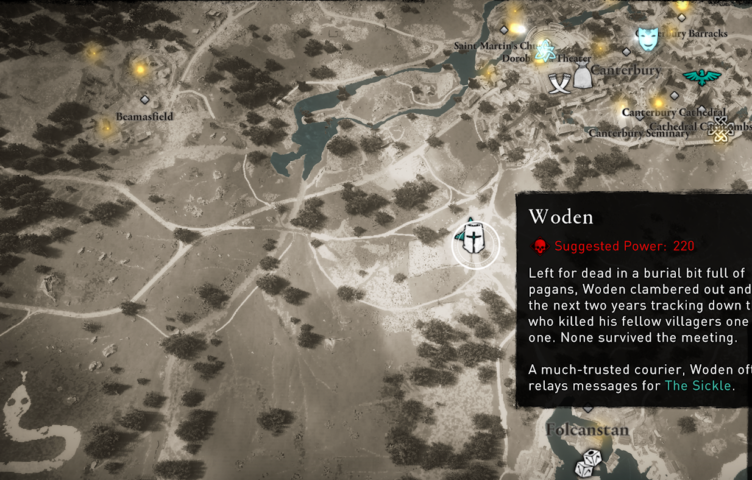 The next fanatic is Woden. He patrols the western part of Kent and you can find him on the roads leading to Canterbury. It has a lower power level (220 units), but it can throw smoke bombs and flammable bombs. 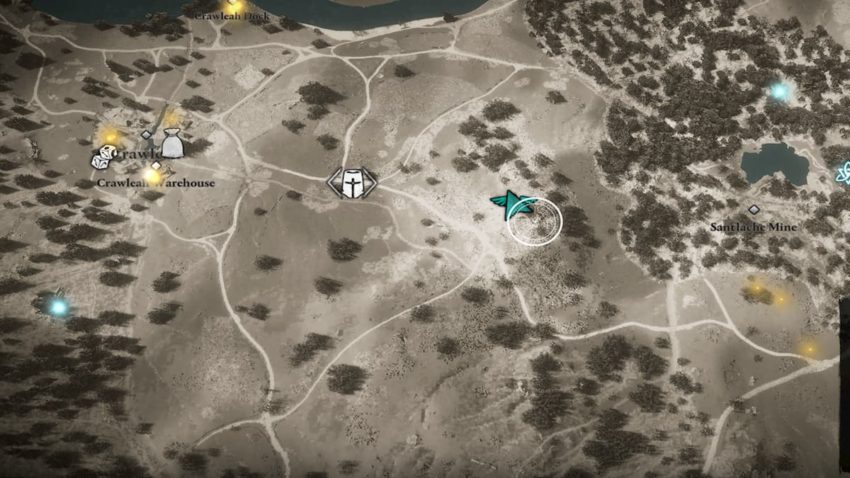 The last fanatic you need to take the tablet from is Hrothgar. You will find it in the south, around Crawley in Sussex. The most dangerous enemy (280 power level), armed with an ax and gas bombs. 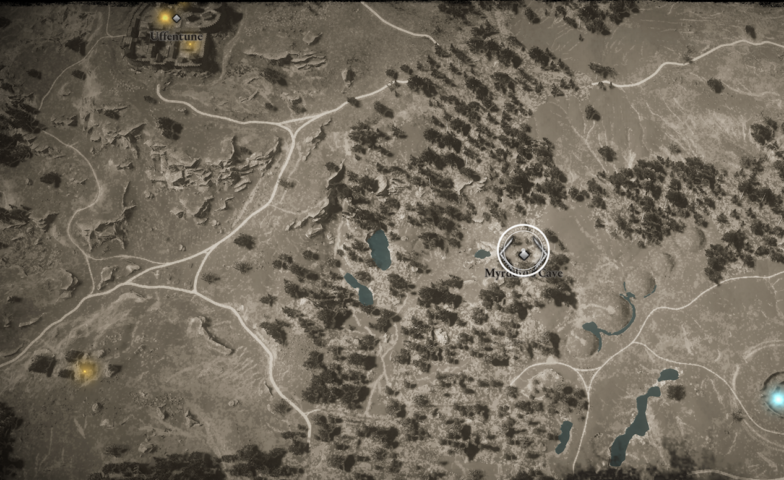 After you go through all the caves and kill all the fanatics, you have to go to Mirdinna Cave, which is located in Hamptunshire, southeast of Uffentun. After overcoming a difficult section, you will find yourself in a body of water. Dive and swim to the other side until you find yourself in a large cave where you can get out onto dry land. Then turn right and make your way through the ruins. At the end of the path, another cave will open in front of you; eleven large columns stand in a semicircle.

Each of these monuments must be placed on a plate, the field of which will open access to Excalibur. You just have to repeat the plot of the legends – pull the sword out of the stone. The unique weapon of the Forerunner civilization has impressive performance in all respects, and during critical strikes it can blind nearby enemies.

The best addons for World of Warcraft: Shadowlands