How to tell an original AirPods from a fake: 7 essential steps

Well, if you don’t have time, then know that the quickest way to distinguish a fake from the original AirPods is by the serial number inside the headphone case. Once you have the number on your hands, punch it through checkcoverage.apple.com… If everything fits on the site – you have an original, if not – a fake.

Fake AirPods can be tricky to tell from the original ones, especially if you’ve never held the latter in your hands. Nevertheless, armed with the necessary knowledge, you will be able to understand in a moment what is in front of you: a fake or an original.

Apple Service and Support Eligibility Verification is the easiest way to distinguish fake AirPods from genuine ones. We pass on following link, enter the serial number in the appropriate field, break through the captcha and click on “Continue”. If the serial number is invalid, you will see the following message:

When you enter the serial number of real AirPods, you should see something like this page:

Everyone can’t find the serial number of their AirPods? It is embossed on the inside of the headphone case cover. Here are a couple of clear images showing the location of the serial on the original AirPods. 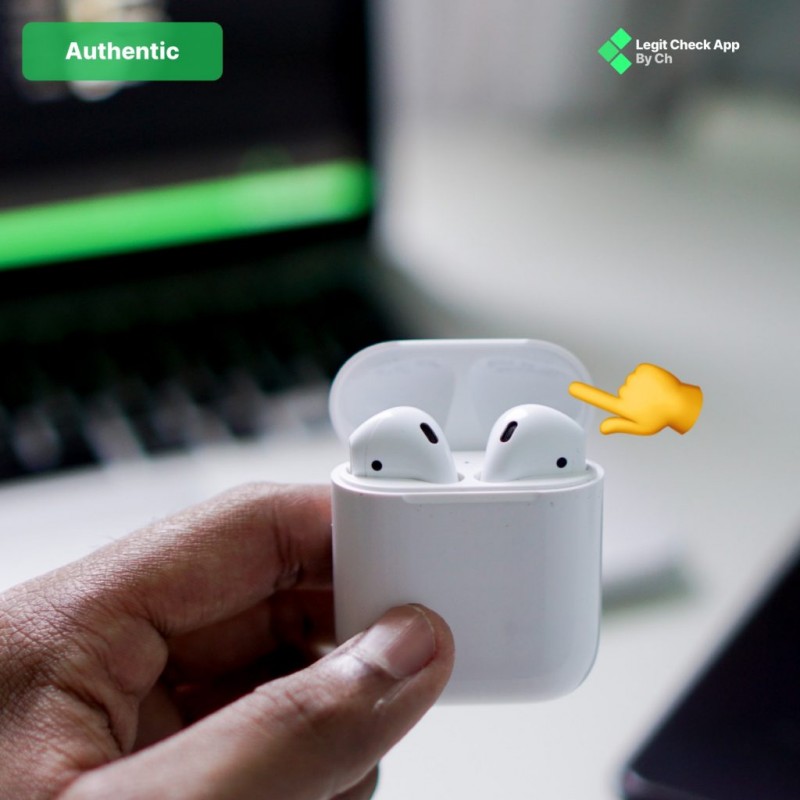 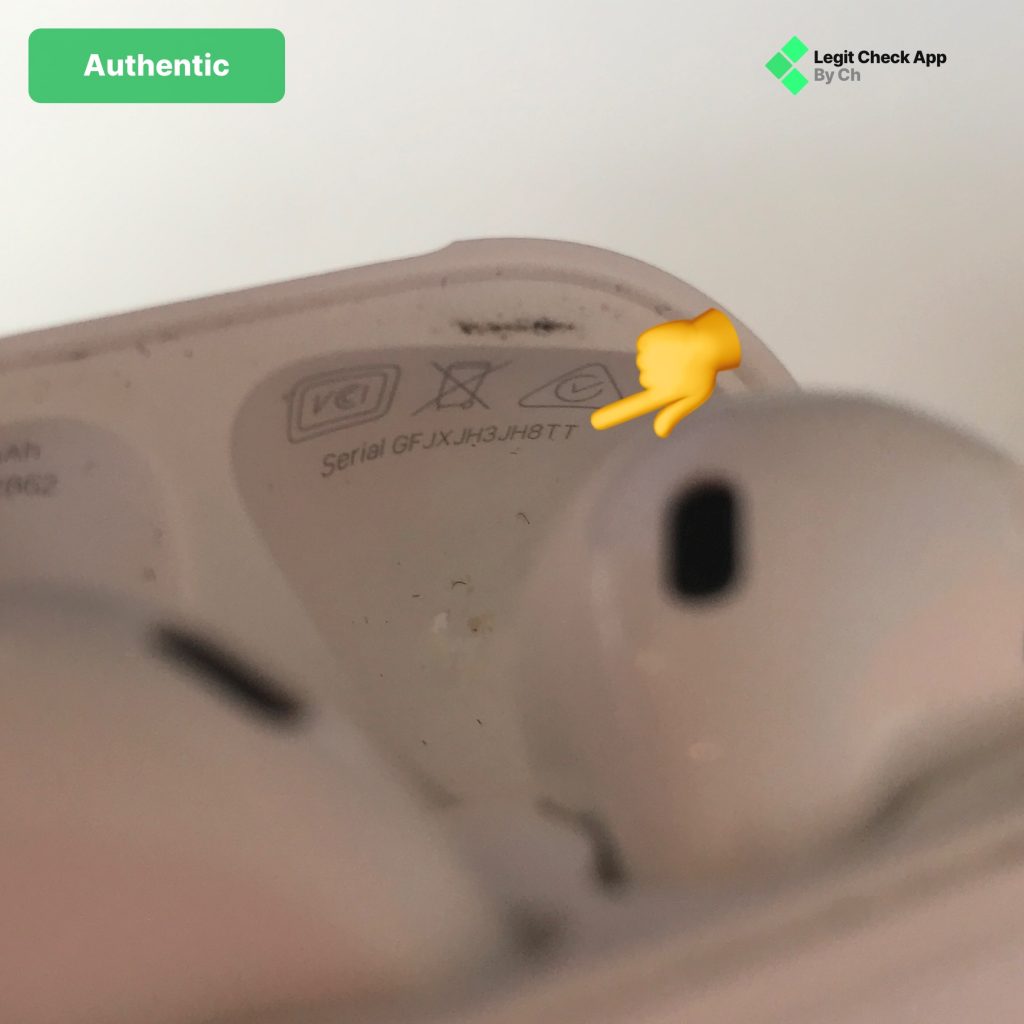 Of course, checking the serial number is only possible if the AirPods you buy are in your hands. Simply put, such a check will probably not be possible with online stores, but you may still be able to persuade the seller to send you a couple of photos with a serial number.

The green light on Apple’s website is safe to buy right? I wish I could say yes, but there is always a small chance that an unscrupulous seller just temporarily replaced a fake case with a real one in order to earn your trust. Watch closely the behavior of the seller, whether he will take AirPods to the back room in order to look for a “box” from them and stuff like that. Check the serial again before leaving the store.

Fortunately, there are other things that can tell you if you’re holding real AirPods.

Step # 2 Check the AirPods box for any inconsistencies

In fact, you can tell that you have fake AirPods in front of you even by their box. The seller will only be able to deceive you if you do not peer into the small details scattered across the entire surface of the headphone packaging. So let’s start from the back … 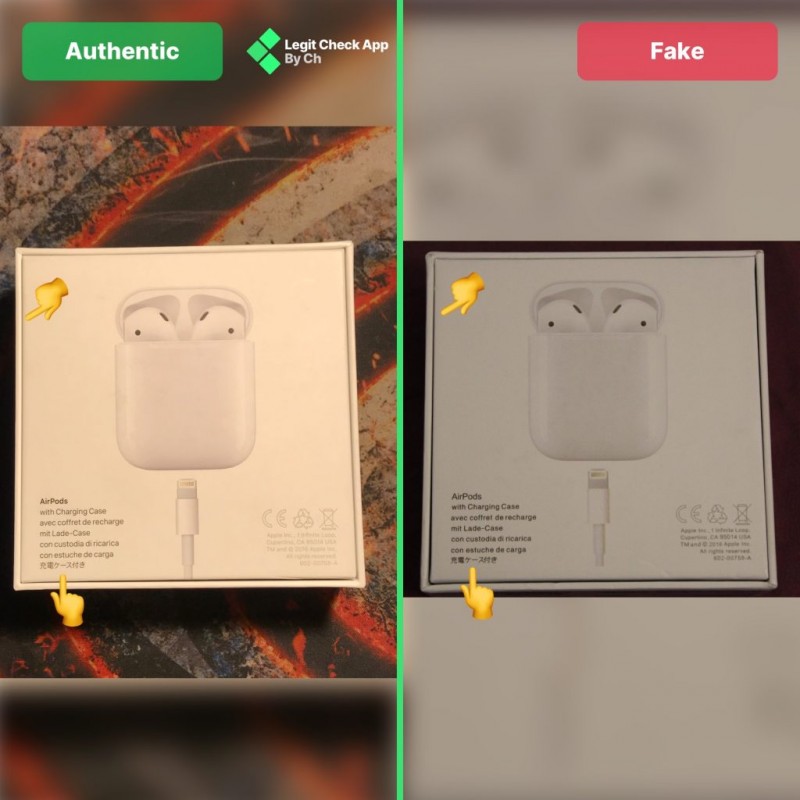 You can see three things here:

Moving on to the back of the box. The counterfeit box has the inscription “AirPods” significantly different from the original. Firstly, it did not use the classic San Francisco font. Secondly, the counterfeit lettering has mirror-like properties, which the original gray lettering definitely does not have. 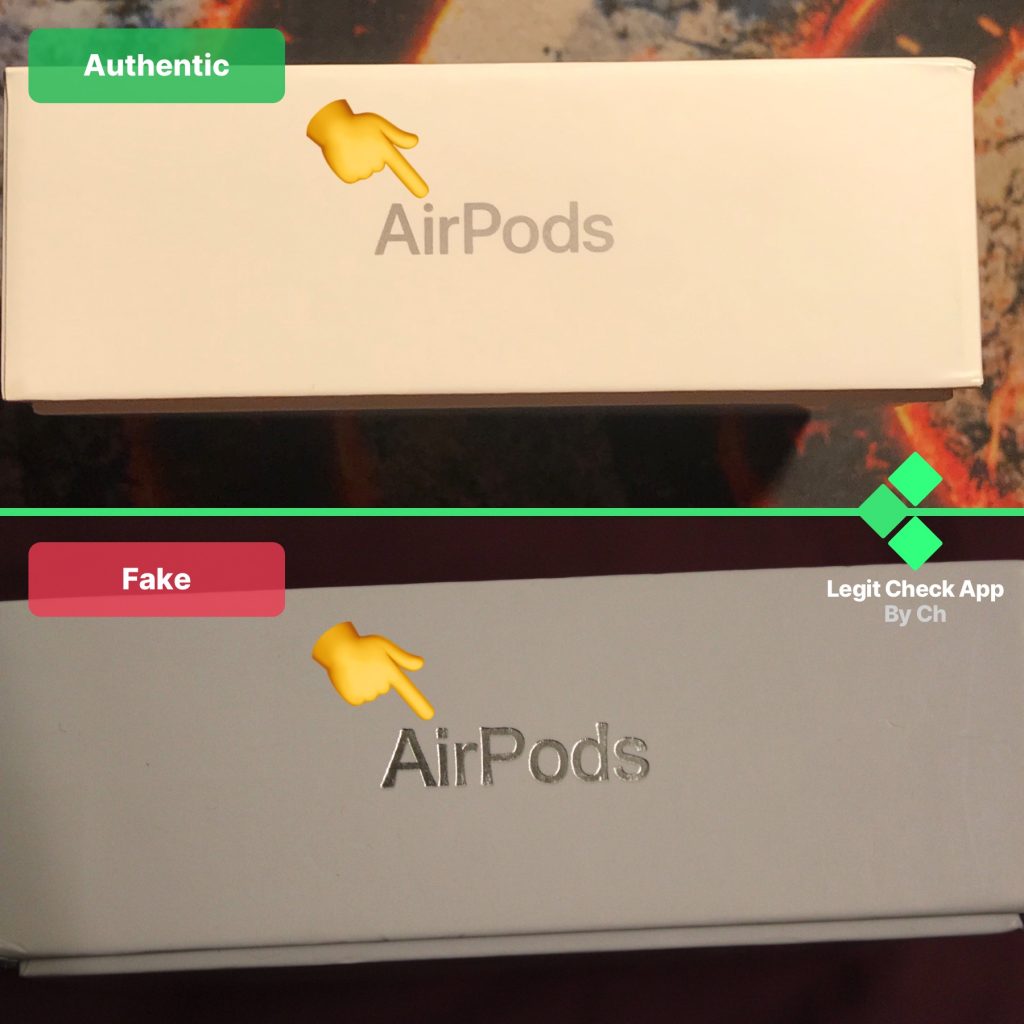 Moving on to the other side. Here it is very easy to distinguish a fake from an original. The original AirPods box has a couple of stickers in this place, while the fake one has the information printed right on the box. Among other things, the fake on this side has a Chinese text in the upper left corner. Of course, it can also be present on the original packaging: it all depends on the region in which the AirPods were purchased. As with the back side, the fake has a thicker text font here than the original. 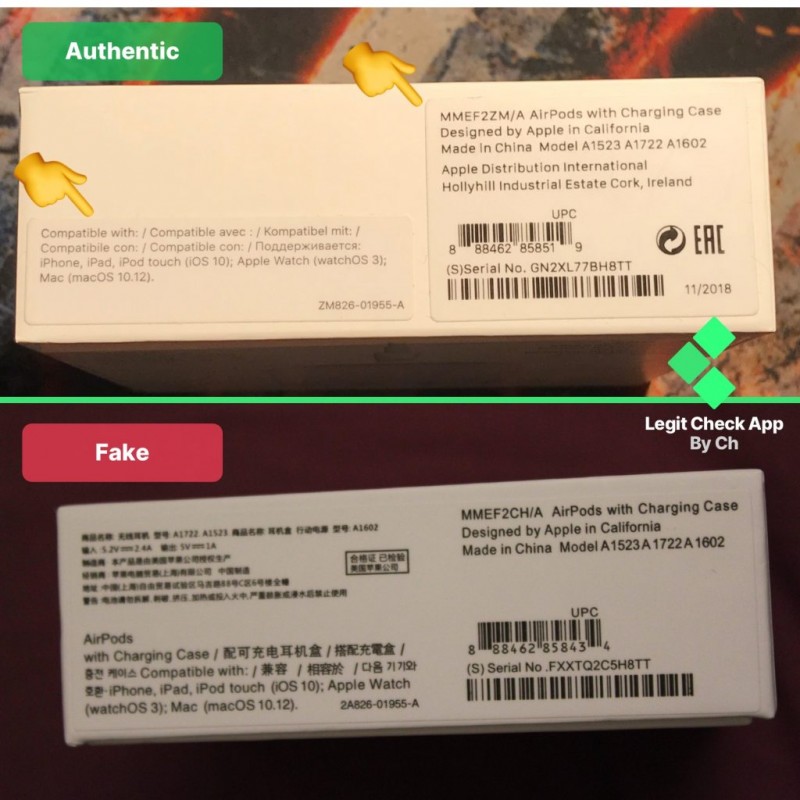 Moving on. The original AirPods have the Apple logo on this side of the box in gray. For a fake, this logo is embossed into the surface of the cardboard, plus the logo is made of the same mirror material that you could see on the other side of the box.

Now let’s take a look under the hood. Opening the box, you will see a small cardboard folder containing the user’s manual. On the surface of this folder, you can see the inscription “Designed by Apple in California”. The original AirPods will have this inscription in gray, fake ones – in black, and the font itself is fatter. 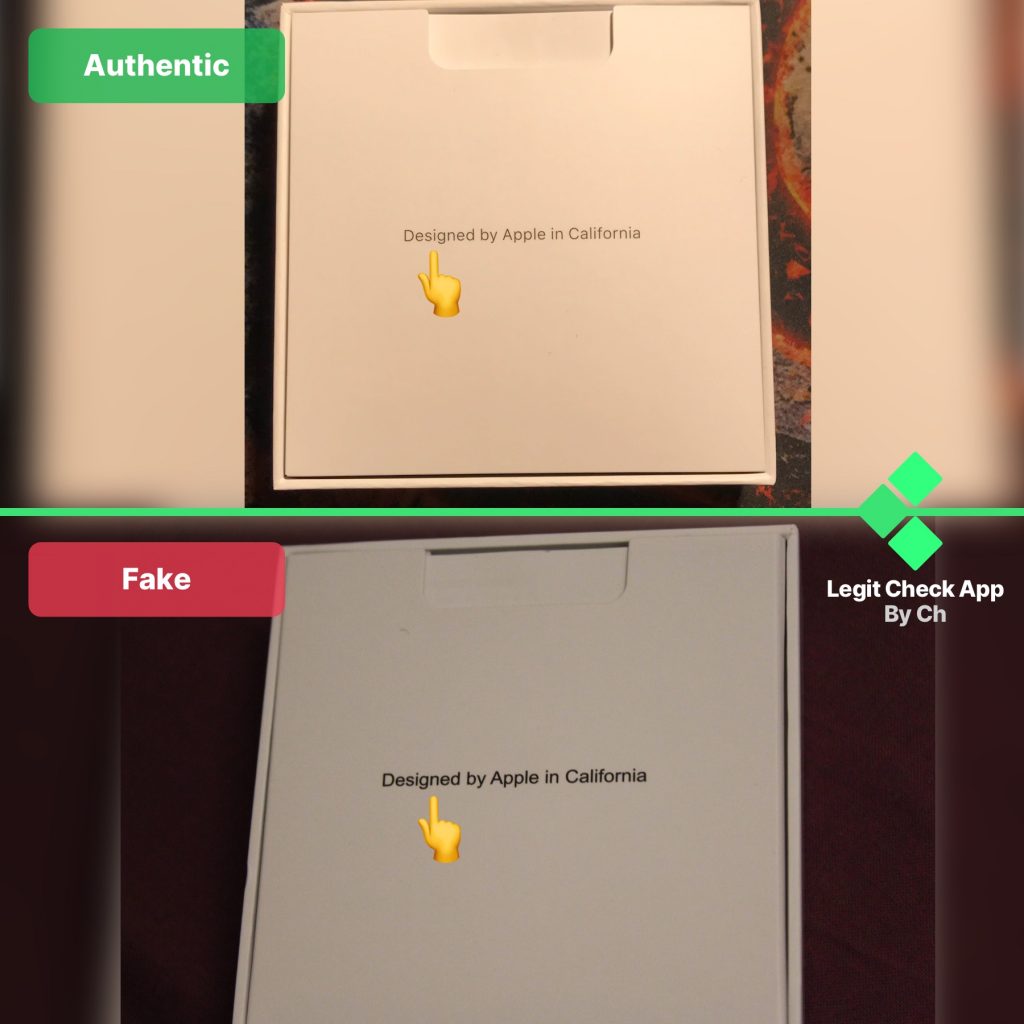 The differences between the original and a fake one box, fortunately, are not limited. It’s time to properly study the AirPods themselves. Pick up one of the headphones and take a closer look at the bezel and mesh of the diffuser. This is what the original earphone looks like and the fake one: 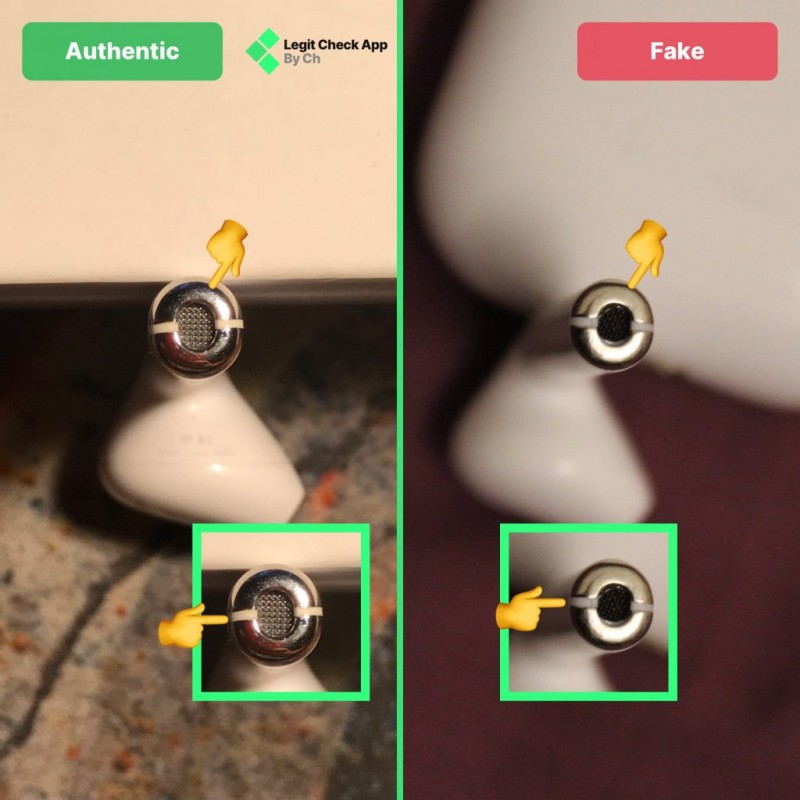 As you can see, the mesh and shape of the diffuser frame of the original earphone are strikingly different from a fake. Also, notice the two stripes that cross the bezel. In the original, these stripes are on the same level with the frame itself, and in the fake, they are set much deeper. 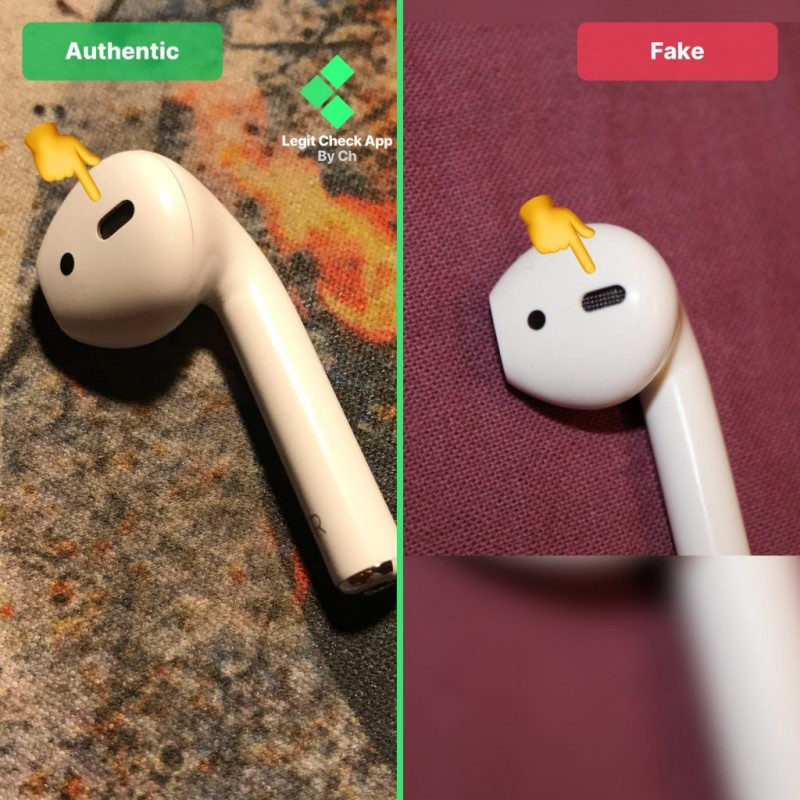 Fake AirPods have something to cling to, too. Let’s go through all the shortcomings of a fake in order: 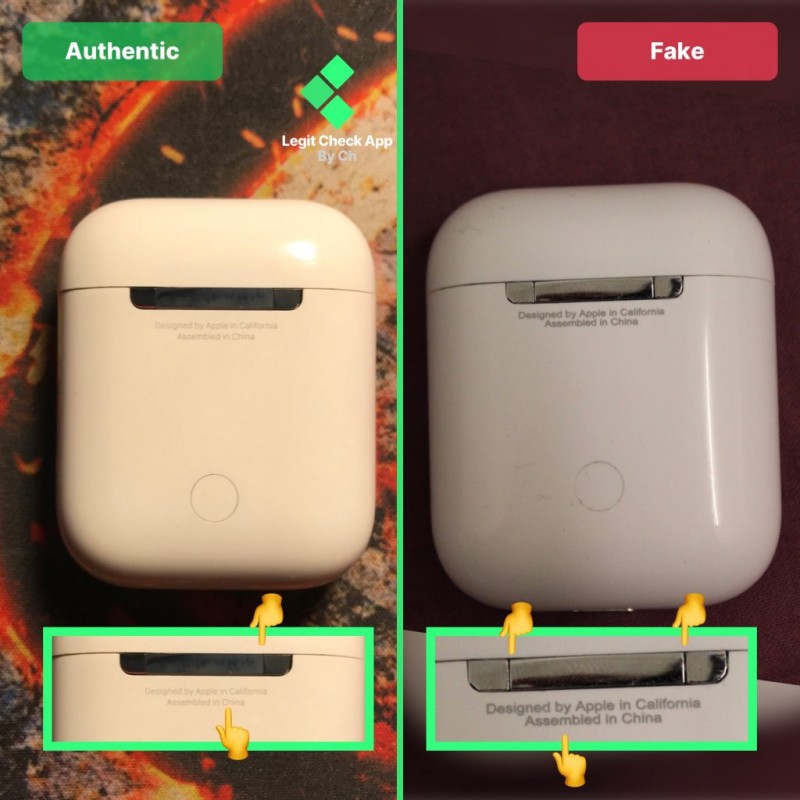 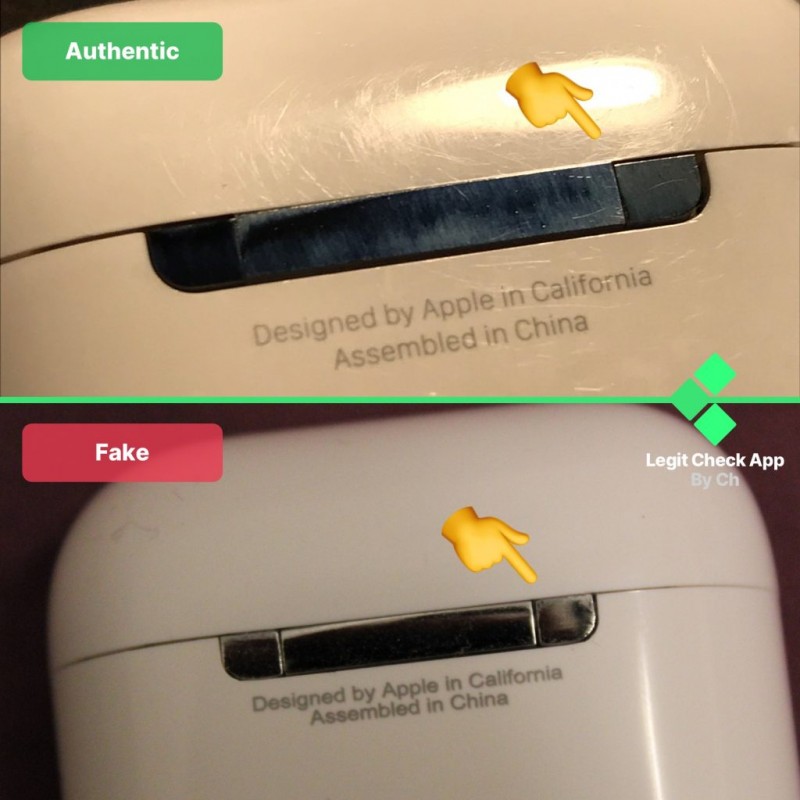 Turn the case over and inspect the Lightning port through which the case battery is charged. 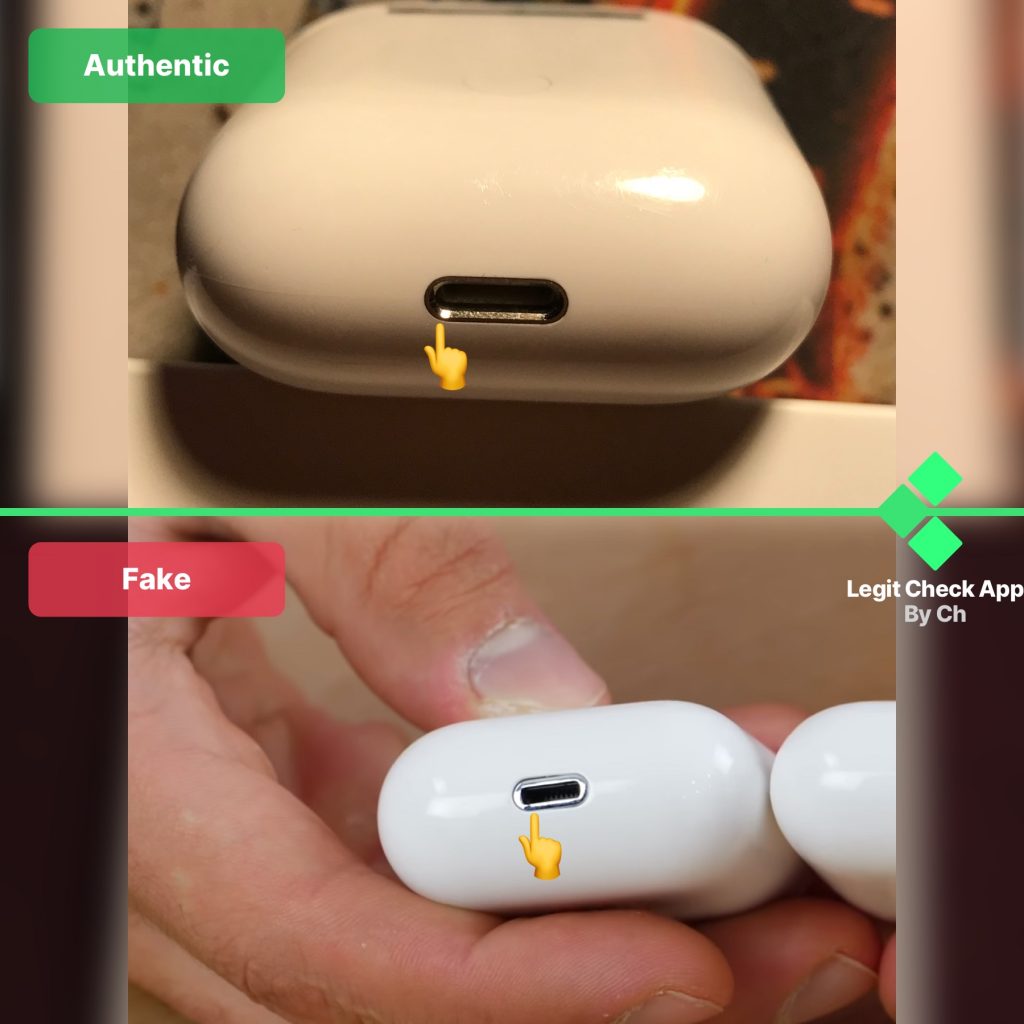 As you can see, the metal bezel of the port is much thicker on the fake case, which gives the port a bit of a bulge. Also, this frame is slightly different in the color itself.

Step # 7 Inspect the diode inside the AirPods case

Last but not least, you need to look out for the small diode inside the AirPods case. In some (but not all!) Fake cases, this diode may be slightly shifted in one direction or another. If the diode is not in the right place, i.e. not centered between the headphone sockets, then this is a clear fake.

Apart from all of the above, there are a number of technical differences between fake and real AirPods. Of course, you will not find Apple branded chips inside fake headphones. Most likely, such devices will not be able to access Apple’s special features.

You need to know the following:

Buying any kind of electronics today is an extremely dangerous business. There is always a chance to stumble upon not the most respectable sellers who only want to cash in on you by selling low-grade equipment under a popular brand for fabulous money. There are tons of fake AirPods on the market right now – watch out! Keep our material close at hand so that you can quickly determine if it is a fake in front of you or the original AirPods.

How to unlock iCloud for iPhone and iPad? Unblocking solutions

What technologies of the future brought 2020