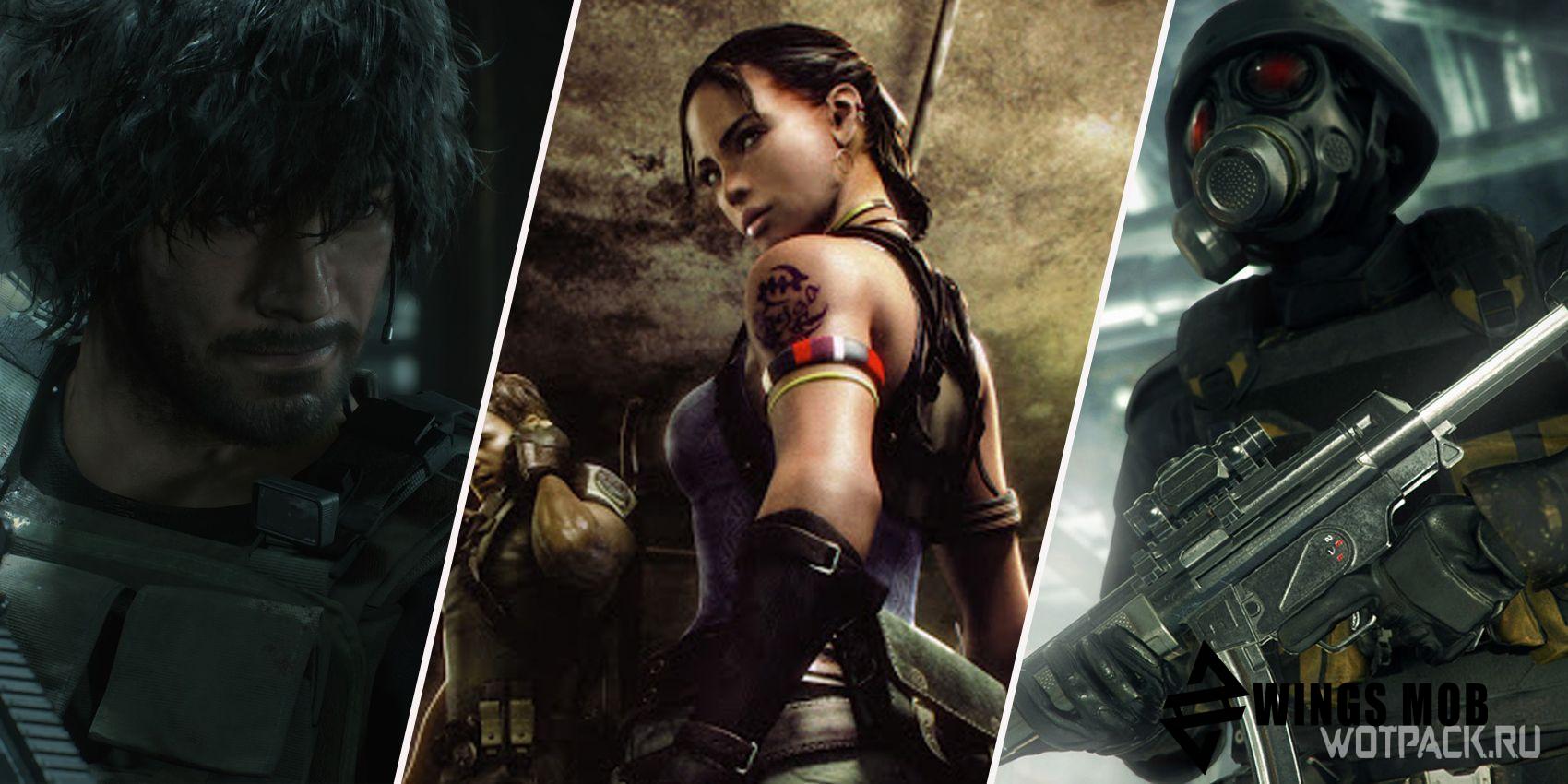 The super-popular Capcom franchise boasts not only colorful protagonists, but also elaborate and memorable faces on the sidelines. It is easy to distinguish among them top ten, which are in no way inferior to the protagonists.

First part Resident evil was released back in 1996 and even then it became obvious that this was only the beginning of the franchise, which soon became an example for other horror films. One of the main features of the “Resident Evil” universe is interesting characters, and this statement applies not only to the protagonists, and to the secondary characters. Unfortunately, even fans of the series often overlook supporting characters, because the focus is entirely on such personalities as Leon Kennedy, Claire Redfield, Jill Valentine, Ethan Winters and others.

The Resident Evil games have a huge number of secondary heroes. And while they may not influence the narrative as much as the protagonists, each deserves attention. And especially those who got into top 10 best supporting characters in the Resident Evil series. Heroes are listed from tenth place to first.

Luis Serra appeared only in Resident Evil 4, and then not for long. This mysterious Spaniard stands out for his flamboyant playboy personality, while versed in a multitude of challenging disciplines. Louis worked with a parasite that eventually infected the entire village, so he had to fight the virus…

The meeting with the main character Leon Kennedy was controversial, but over time, the characters were able to trust each other. As a result, Louis helped the protagonist leave the village… Moreover, after his death, the Spaniard left behind a lot of valuable information that Leon needed.

Behind Luis’s jokes and satisfied grin hides tragic fatebecause he is looking for a cure for a virus that killed his grandfather. If you go through Resident Evil 4 without deeply immersing yourself in the character’s story, then it can be completely overlooked.

Barry Burton first appeared in the first Resident Evil and was as important a member of Squad Alpha as Jill Valentine, Chris Redfield, and Albert Wesker. Even then, he had a significant impact on the franchise.

Then Barry appeared in some of the following Resident Evil games, in particular, in the third and second parts, as well as in Revelations 2, where his participation was at all key.

Fans remembered Barry for the quote: “If you got crushed, we’d have a Jill Sandwich”. Subsequently, this nickname was attached to Jill and slipped as a reference.

At the time of the Raccoon City incident, Barry Burton was working as a weapons specialist in the STARS squad.He continued to participate in secret missions, bioterrorism-related… Barry greatly aided Jill and the campaign at Spencer’s mansion by supplying the crew with weapons. He also assisted in evacuations from Raccoon City to Jill and Carlos…

It would seem that the role of Barry Burton is insignificant, but if not for him, the lives of several key characters could have ended by now.

Marvin Branagh is a minor character in Resident Evil 2 and 3. He is a lieutenant in the Raccoon City Police Department who is still on duty even after the virus outbreak. When the parasite has entered the water supply system city, Marvin was instrumental in finding survivors and became the commander of the remaining guardians of law and order.

The player first meets the lieutenant at the police station as Claire or Leon. Marvin is already injured, nevertheless, he manages to help the protagonist of the second part. In the process of passing, the character is revealed more and more. It becomes known that he contracted a virus in an attempt to protect others, so his tragic death settles in memory.

HUNK clearly not one of the key characters in the Resident Evil games, but still, it is a very interesting and mystical character. Deadly agent Umbrella it is distinguished by strength, endurance, cold-bloodedness and excellent tactical savvy. He owes his impressive skills to training at the Rockfort Island military base. The agent is also known by the speaking name “Mister death”.

HUNK appears in a myriad of Resident Evil games: a whopping nine. He does not always appear in the main campaign. For example, “Mister Death” can be played in the mini-game “The Fourth Survivor” in Resident Evil 2. There, he demonstrates excellent use of weapons and the use of any methods for survival that would seem impossible for an ordinary person.

Sentenced to death for murder Billy Cohen escapes from prison and accidentally meets a medic Rebecca Chambers, which is one of the main characters in the franchise. As a result, an unusual union turned out, and Billy significantly helped Rebecca in revealing the secrets of the Umbrella corporation, and even saved her life. All these events take place in the game Resident Evil 0.

After Cohen played one of the main roles in the zero part, he only appeared as a minor character. Rebecca let go of Billy in the Arklay Mountains, taking his tokens as proof of his official death. It is not known what is with the character now, but some fans are still expecting when Capcom remembers him.

Lady Dimitrescu took all the attention of Resident Evil Village players, pushing aside her “daughters” as well. However they are worth mentioning in the top, at least because they instill real fear with their appearance.

Daniela, Cassandra and Bela represent three creatures that used to be girls, and now are the embodiment of the Kadu virus (he “collected” their current bodies from infected flies). In the process of confronting them, Ethan learns that the “sisters” are afraid of freezing temperatures, and effectively uses this against the trinity.

Like Alcina Dimitrescu, Daniela, Cassandra and Bela feed on blood, especially preferring human blood, once belonging to young girls. They obey the countess unquestioningly and, it seems, love her like a mother…

Despite the rather short time that was devoted to the “daughters”, they were remembered by many players. Perhaps this is the merit comparisons to Dracula’s brides, of which there were also three.

Resident Evil Village: all the secrets of Lady Dimitrescu

Carlos served in UBCS Delta Platoon, which was a division of Umbrella. He was also a specialist in heavy weapons and vehicles, so he was always considered a member of the squad.

Overconfident, but at the same time charming Carlos Oliveira, became the second most important protagonist of Resident Evil 3 after Jill Valentine… Together, they formed a team of two, successfully handling the dangers in Raccoon City. It is unlikely that Jill would have been alive if not for his help.

After completing Resident Evil 3 Remake, the opportunity to start new game for Carlos… His gameplay is fundamentally different from Jill, as he prefers to go ahead, making his way with an assault rifle and brute force.

Unfortunately, after the third part, Carlos appeared only in corridor shooter for Wii and in cooperative failure Operation Raccoon City… Most likely, Capcom decided to abandon the character for unknown reasons. It’s a shame, because many fans of the series liked it.

Exactly Mia Winters is Ethan’s main motivation in Resident Evil 7, who goes to rescue his missing wife from a gruesome mansion without hesitation. She also plays a minor role in Resident Evil Village, but her personality is not as simple as it seems at first glance. Just what is the fact that Mia was secret member of a criminal organizationthat clandestinely produced biological weapons. In addition, she participated in the transportation of bioweapons Evelyn, which subsequently struck the entire region, including it.

Mia Winters’ identity is still not fully revealedbut that is what makes the character so interesting. Surely Capcom will tell more about her if it decides to continue Ethan’s story.

Exotic compared to other characters in the franchise, Sheva Alomar appears in Resident Evil 5. He is a skilled BSAA specialist who is used to dealing with all kinds of difficulties and solving problems quickly and efficiently.

In the fifth part, Sheva replaced Jill Valentine, becoming Chris Redfield’s partner… She was one of the two protagonists in Resident Evil 5, and is highly remembered by fans for her tough yet feminine personality.

Sheva’s role was significant in only one part of the series. So far, she has not appeared anywhere else, not even in Capcom multiplayer projects. However, fans of the character look forward to waiting for specialist Alomar to return.

Duke – the most mysterious character of Resident Evil Village, which has become a favorite of the players. He is happy to bargain with Ethan Winters, and also shares important information with the protagonist, which is often hidden behind half-hints and intricacies of words. It is not known who exactly the Duke is, but most likely he is one of the longest-livers of the village. The merchant is clearly opposed to Miranda’s mother and her experiments.

The Duke is found in several places and even saves Ethan at the end of the game… He is like the guardian angel of the protagonist, who pulls him out of the clutches of death.

Resident Evil 8 Village: The Duke is the most mysterious figure in the game