The Shadowlands add-on has added many new locations to the game, including the Death Feast dungeon. To enter there, you need a squad of five players with a level of at least 51. Inside the dungeon, you will have to face four powerful opponents who came from Maldraxus, who previously plundered the Temple of Courage, killed the Kyrians and are now preparing to attack the Bastion. 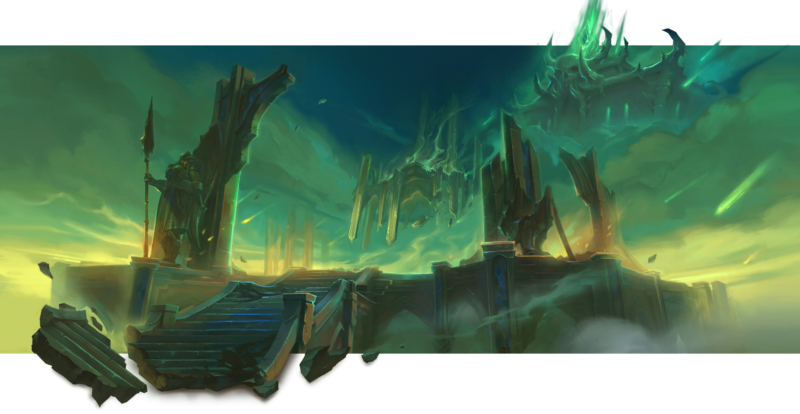 A large and ugly monster with a couple of extremely unpleasant abilities. He can hit one of your party members with the Bubbling Vomit spell, which will be warned by a green arrow. If this happens, the player marked with the arrow must remain in place, while everyone else moves to the side to avoid being affected by the spell. Bubbling vomit also spawns three corpse-eating worms that will chase random group members. Kill them before they can bite, otherwise the ability to swallow blood will make the worms even more dangerous, and after three bites, they will explode, applying periodic damage (DoT) to nearby players. Chumokost also casts Fetid Gas from time to time, dealing area damage. At this time, stay away from the cloud and continue to kill the appearing worms with the Heaving Retch spell.

Amarth is somewhat weaker than Chumokost, but he can easily destroy your group if the battle drags on. From time to time, Amarth strengthens the onslaught, summoning adds with the help of the Realm of the Dead spell. After a while, he casts the Last Harvest spell, which will lead to the explosion of all adds, including the corpses of the fallen. But the difference is that when corpses explode, they inflict damage only on the nearest players, and living adds – in general, to all the characters of your team. You need to have time to kill all opponents before the spell, and quickly move away from their bodies. Also, keep in mind that each new Last Harvest spell increases the damage from the Tormented Echoes ability of the boss, which manifests itself every time allies or enemies die. Apply healers and try to finish the battle as soon as possible.

Another dangerous spell of Amart is Necrotic Charge. If any of your members have an interrupting ability, use it to prevent an enemy from casting a Necrotic Charge. The main thing is not to confuse this spell with necrotic breath, from which you must immediately run to a safe distance.

Technically, the meeting with Truposhov begins when you first enter the necropolis. Your group will have to destroy all the mobs before the boss appears. You don’t need to worry too much about them, but if you are targeted by the Throw of the cleaver spell, try to get the enemy on the line of throw, then he will get all the damage.

When Truposhov appears, you won’t be able to get close to him until you get rid of a pile of his Creations. The boss will stand on the platform where the Noxious Mist makes him invulnerable. At some point, one of the group members will receive a target icon for the Meathook spell. This hook will come in handy to pull Truposhov down. Now hit him with everything your group has before he climbs back to safety.

For the final boss of the dungeon, Nalthor doesn’t have that many abilities. Nalthor periodically applies a magical binding debuff called Bindings of Ice, but your healer can remove them. But with the Comet Storm spell, you should be careful. They inflict colossal damage, tied to the place where comets fall, so you need to move all the time, avoiding dangerous zones.

After filling the energy scale at Naltor, he casts the Dark Exile spell, sending one of the players to the lower level of the necropolis to fight a mob, which will slow down and deal damage with Debuff. The player needs to have time to deal with the enemy and return back in 50 seconds, otherwise he will die.

How to get the fastest car in Cyberpunk 2077