During the passage of Wasteland 3, players will have to make a huge number of decisions that can potentially affect the gameplay, both in a positive and negative way. In today’s article, we will tell you in full detail about these choices and their consequences. 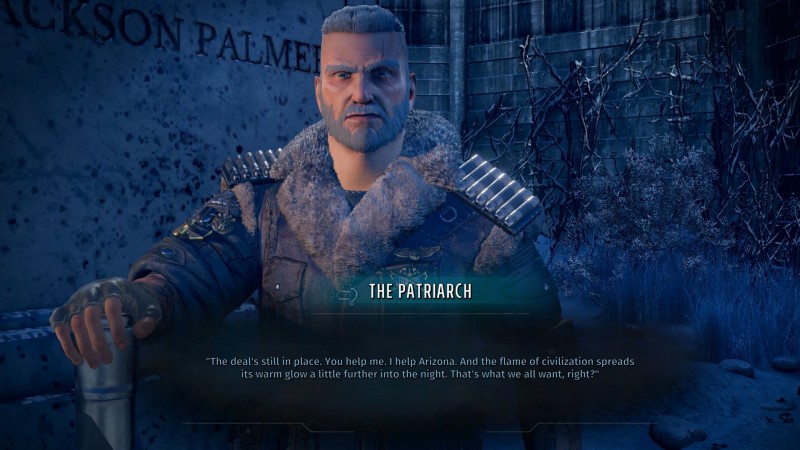 The fate of the Dorsey prisoners

At the very beginning of Wasteland 3, you have to decide the fate of the man who became Dorsey’s hostage. You can try to hostage by intimidating the bandit with the “Iron Ass” or “Licking” skill. However, in this case, he will be able to escape and he will even warn his friends about you. You can also simply kill the bandyugan, but the hostage will also die with him. It all comes down to whether you want to keep the hostage alive and fight additional enemies or not.

Unfortunately, in this situation, your decision does not matter. Faith will die and you cannot do anything about it.

The following will be a series of choices (not in sequential order!) That are directly related to the headquarters of the rangers.

If you decide to kill Dorsey directly at the headquarters walls, you will receive one (+1) to reputation with the Patriarch.

With this choice, you will not receive additional reputation, but the Patriarch will still thank you.

Dorsey will go to jail.

Try to give first aid

You will see that the Patriarch has a tremor. He is almost certainly ill with something, nevertheless he will brush it off and assure you that everything is fine with him.

Another small plus (+1) to the reputation with the Patriarch.

Claim things and try to leave

You will not be able to leave, no matter how much you want to. The armored guards will not forgive you corny.

Using the “Licking” skill, you will not fight.

The bot will answer yes, permanently, after which you can continue the dialogue with it.

You are going to fight with a bot-servant.

Bot will be surprised by such a statement, but after that he will still attack you.

Your group will leave the bot.

The Destiny of Del Hackett

Del Hackett will ask you if she can stay.

Say yes they can stay

Get a plus (+1) to reputation with refugees.

Say no, they can’t stay

The refugees will clearly not be happy with this decision and you will receive a minus (-1) to the reputation with this faction.

The prisoner will leave, but will say that you will see him in the future.

Leave the prisoner locked up

The prisoner will remain in the concentration camp cell.

What to do with Austin?

You will be able to rescue Austin and take him to the ranger headquarters. As a result, you will gain reputation with refugees (+5).

You will free Austin, but you will have to say goodbye to $ 200.

To say Austin is not a bad person

Unfortunately, this choice will not affect anything – choose another answer.

The same as with the previous choice.

Get in the way of Lucia

You will stand between Lucia and Isaac, thereby saving the life of the latter. Lucia will thank you for such an act in the future. However, a little later you will have the opportunity to arrest Isaac right at his base, or even hand him over to Daisy.

Isaac will be put in a punishment cell and a jailer will be assigned to you.

Put Isaac into the hands of the Patriarch

If you decide to give Isaac into the hands of the Patriarch, you will receive an increase in reputation (+5) with the Patriarch’s sheriffs.

You will let Lucia finish off Isaac, but she will not be at all happy with this outcome.

You can kill Isaac on your own, but Hundred families will be upset by this act and you will lose their reputation.

Once you’re done talking to Irv, you can either send him to Sans-Lux or invite him to stay at your base. If you decide to do the latter, then you will have the opportunity to create battle clones.

Wolfe will be very upset if you do not kill Cint, and so much so that he stops giving you missions. Sint, in turn, will continue to kill. After killing Sint, you will receive a reward from Wolfe, and then he will ask you to find three more of the same guys.

Holly can be found in the downtown area, being chased by the slave owner La Perla. You can let Holly go and get an increase in reputation with refugees (+10) for this, or lie to her so that she goes to the headquarters of the rangers. The reward for the last choice is first-class armor and access to the underground base.

Give away five hundred dollars

By paying $ 500, McTavish will provide you with the information you need and thank you.

If your barter is pumped to the fourth level, you can get the information you need not for $ 500, but for $ 300, but in this case, McTavish will not thank you.

Threats to force McTavish to give out information

You will get the information completely free of charge.

The same as with the previous choice.

By accepting one of the above four choices, you can decide the fate of McTavish.

Drive McTavish out of town

Maktavish can be asked to leave the city limits, to which he will agree.

Letting go in exchange for money

McTavish will give you $ 115 and then leave.

McTavish can be sent to the sheriffs (+5 corresponding reputation) or to his personal punishment cell.

After killing Maktavish, his special mask will fall into your hands (+3 to armor, +1 to repair toasters, +1 to mechanics). In this case, the reputation will not be affected in any way.

In Little Vegas you will meet the boss. You can either fight him or try to arrest him. If you succeed in making an arrest, you will receive an increase to the reputation of the Sheriffs of the Patriarch (+15), as well as cash and grenades. However, for this you need to use the console located near the passage to Braigo.

Choice on the world map

After you deal with a bunch of smugglers, the refugees will turn to you for help. Convince Jones, who is in the Wildlife, to bring the refugees to the city. This can be done by giving him $ 300 or by using the Licking skill on him or level six barter. Alternatively, you can arrest Mama Cotter. Once you do this, refugees will no longer show up in the city. If you want to take her to the sheriffs, then you will have a fight with her family, plus you will lose some reputation with the refugees. By sending her to a personal punishment cell, Reyes will reward you with mechanics and the reputation of the Hundred Families. Roughly the same reward awaits you if you decide to continue to lend a helping hand to refugees and not touch Mama Cotter: the reputation of refugees (+15) and mechanics. However, the latter choice will not please Gideon and you will lose a small part of the reputation of the Hundred Families.

Choosing between hippers and gods

Taking the side of the hippers, you will have to destroy the camps of the gods.

Sint in the Commune of Machines

In this situation, you have two choices: fight the synth or use the Licking skill.

Resolving the issue with Reagan

You can, of course, place Reagan in Valor, but you can just as well just finish him off. Using the skill “Licking” (fifth level), you can independently decide where to place Reagan. It can be given to Machine Intelligence, but in this case, you will have to fight the hippers. You can also place it in the ranger headquarters, but this choice will not please the robots. Among other things, you can steal Reagan, after which the battle will immediately begin. If you want to give Reagan into the hands of robots, then you will be given a special robot that you can take into your squad.

First, rescue the prisoners, then go to the room where Ash is located. You can do three things with it: arrest, kill, or release. When arrested, he can be placed either in his punishment cell or in the sheriff’s jail. If you decide to free Ash, he will simply thank you. Interestingly, the game does not impose any fines on you for killing him.

Vic Buchanan can be dealt with in two ways: arrest him or take him to your squad. It’s not clear who wants to do the latter, but okay, variability is good.

Lucia will turn against you if you want to fight the Patriarch.

Is Cordit in your squad? Then the Mechanic won’t want to do business with you. Either Cordit or Mechanic – the choice is yours. If you choose the Mechanic, then you will forever lose Cordit, and if you choose Cordit, you will have to enter into battle with the Mechanic and robots. Choosing Cordit, the latter will engage in a fight with the Scar Collector, and then become the leader of the gang and lead her towards Kansas.