Ghost of Tsushima definitely cannot boast of a rich assortment of weapons: a katana, tanto (short sword) and a couple of bows are available to the player. However, what the game boasts is a variety of armor and vestments!

Some of the wardrobe of Jin Sakai, the protagonist, is unlocked as you progress through the main plot, and some – only when certain conditions are met. Let’s take a closer look at the robes and armor in Ghost of Tsushima …

All vestments and armor in Ghost of Tsushima 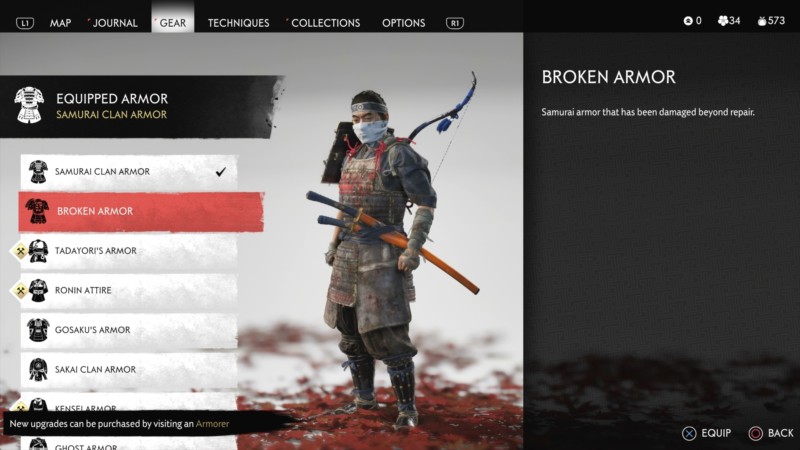 In the introduction of Ghost of Tsushima, Jin will have extremely durable armor, however, after the prologue, it will turn into complete junk. No defenses, no perks – it can’t even be repaired or improved! As soon as you get the chance, swap out your broken armor for something better, literally good enough. 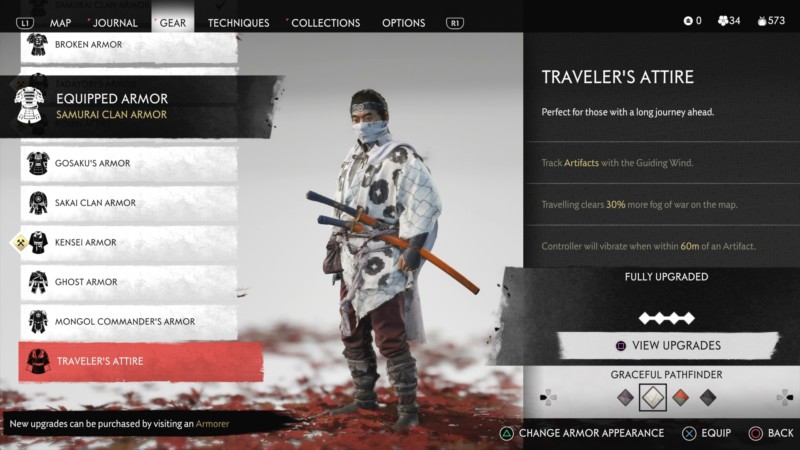 Such an outfit can be obtained at the first meeting with any merchant in the world of the game. And you don’t even have to buy it: he will ask you for it. The traveler’s outfit allows you not only to search for all kinds of artifacts in the game world with the help of a guiding wind, but also to remove the fog of war from the map of the game world in a slightly larger radius. 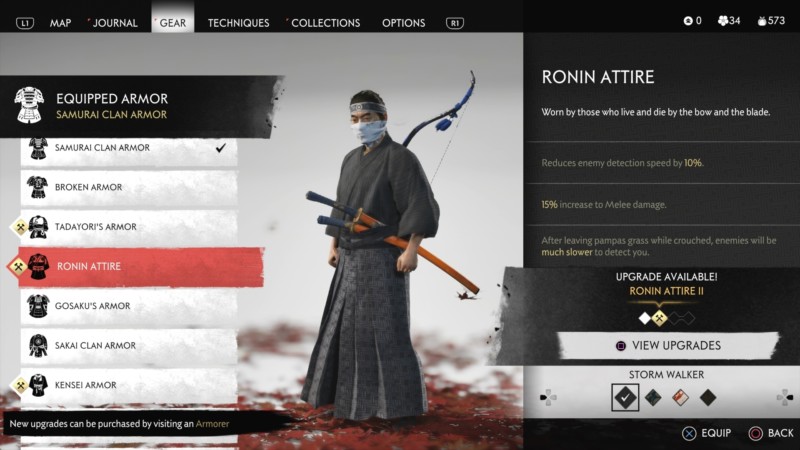 To get the ronin outfit, you need to complete a story mission called “Blood on the Grass” (this is in the very first act). This outfit is useful in that it reduces the speed of your detection by opponents, increases the damage done in melee, plus you can remain completely invisible for a short time after leaving the thickets and grass. 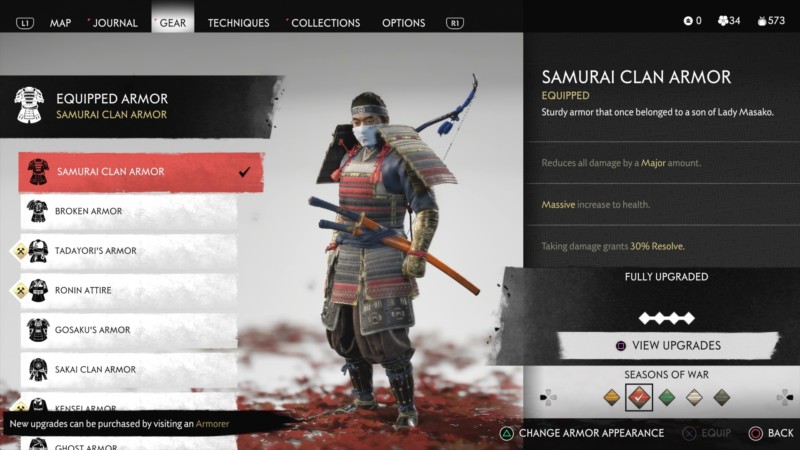 You must complete the mission “The Story of Lady Masako” (also in the first act). Thanks to this armor, Jin takes less damage, and his health is greatly increased. In addition, when receiving damage, the hero gradually begins to accumulate determination.

Can be obtained after completing the Ghosts of the Past mission (found in the second act of the game). Armor grants the player increased melee damage, increased health, increased confrontation streak, and an increased chance to intimidate foes. To get the achievement “In One Swoop”, you will have to start pumping just this armor. 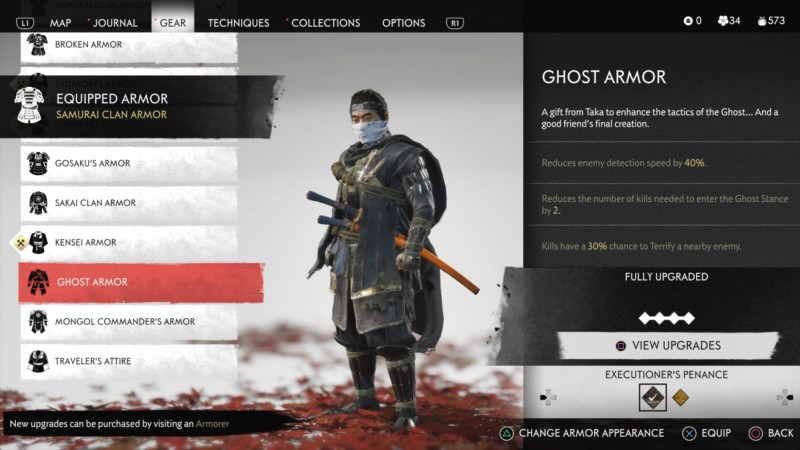 The armor can be accessed in the Out of Darkness mission (still in the second act). Ghost Armor, as its name suggests, slows down detection speed, lowers ghost stance requirements, and increases the chance of intimidating foes. 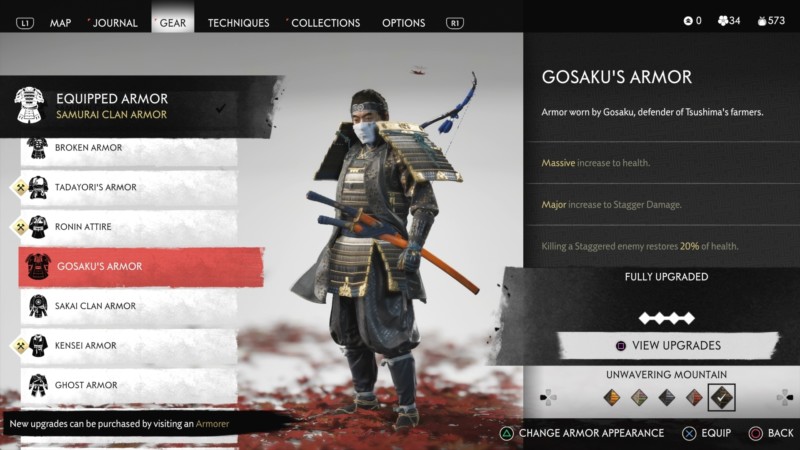 Required to complete a side mission called “Invincible Gosaku”. Armor increases the amount of health, increases damage such as daze, and when the enemy becomes dazed and you kill him, your health is restored. Extremely effective armor for the so-called “rush tactics”. Among other things, this armor is required to obtain the “Cooper Clan Cosplayer” – an achievement with an extremely vague description.

To obtain the Tadayori Armor, you must successfully complete the side mission “The Legend of Tadayori” (in the first act of the game). Equipping this armor, the player will increase the speed of using the bow and increase the concentration time. Also, with headshots from a bow, concentration itself will be restored. Ideal for players looking to focus on ranged combat. 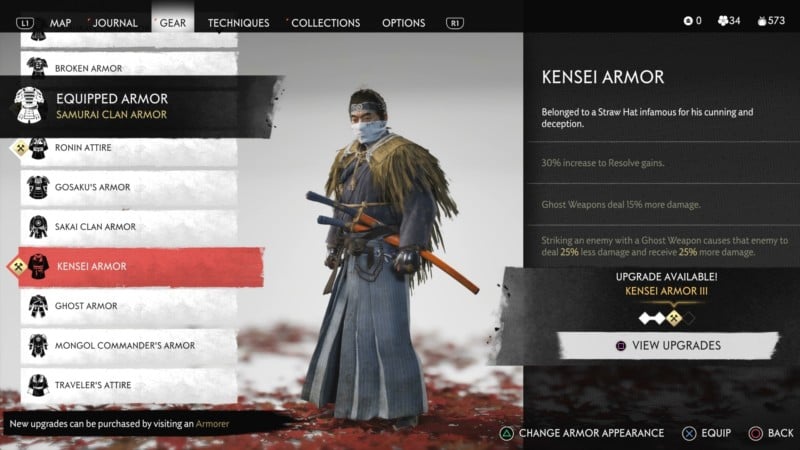 Kensei’s armor is issued after completing the “Six Blades of Kojiro” side-effect in the second act. By wearing it, the player will increase their newfound determination, and the ghost’s weapons will inflict more damage on opponents. In addition, after causing damage to enemies, they will inflict much less damage to the hero, and receive more. 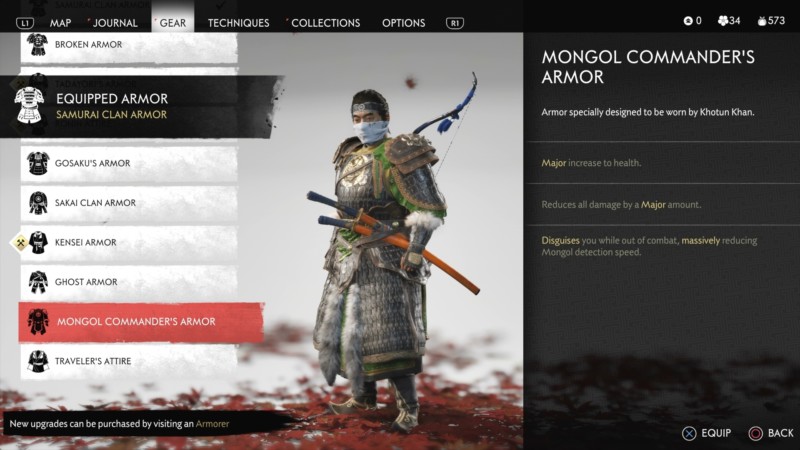 The armor of the commander of the Mongols can be obtained after completing a side effect called “By the measure of the khan”. The armor has fairly straightforward bonuses: increased health, reduced damage taken (of any type) and reduced detection of the main character by the Mongols, especially if he is out of combat. 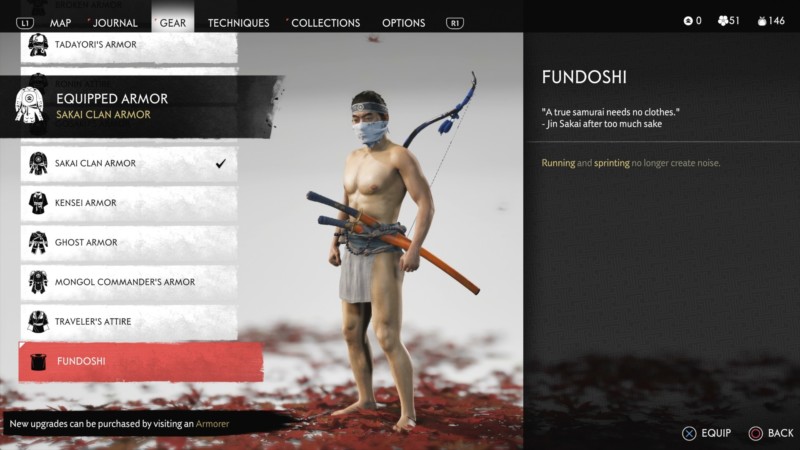 Fundoshi is not armor, but traditional Japanese underwear. This piece of clothing is more of a joke than a useful piece of equipment. However, if Jin wears the fundoshi, he will no longer make noise while running and sprinting. The bonus, of course, is extremely useful, but the fashion world will definitely not tolerate this.

10 most useful charms in Ghost of Tsushima