An overview of all elemental elements in Genshin Impact

In Genshin Impact, everything is based on various elemental elements. The protagonist of the game can use all seven elements, while each of the selected characters can have only one specific element. Literally each of the elements has their own unique perks, talents, and even reactions with other elements. Let’s take a closer look at each of the available elements …

Elemental Elements in Genshin Impact (as of October 2020) 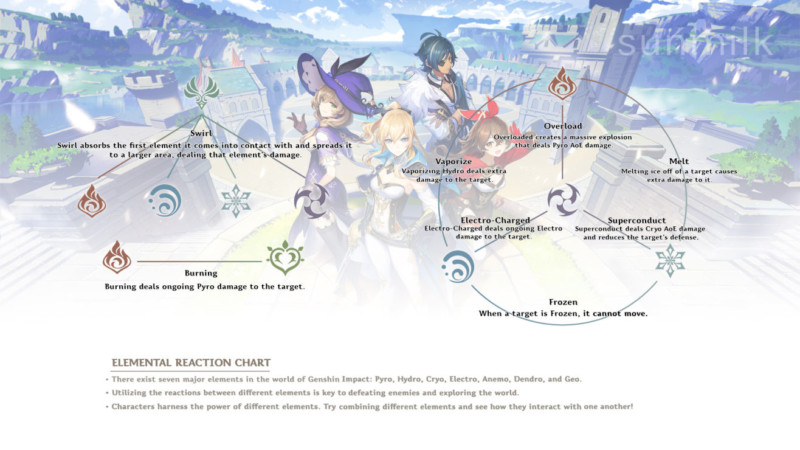 So, in Genshin Impact there is the following set of elemental elements:

At the moment, your main character in Genshin Impact can only use two elemental elements: wind and earth. The rest of the elements will open in the near future, according to the statements of the developers from miHoYo. However, the characters in your squad can safely use each element from the list above. If not you, then at least comrades – it’s already good.

Wind is the first elemental element that will open to you in Genshin Impact. The wind has 2 perks and 3 talents. Of course, the wind can be used to fight opponents, but its main feature is the “Whirlwind” ability, which makes it easy to combine this element with other elements. For example, by combining wind and frost, you create a kind of snowstorm, and combining wind and fire – a fiery hurricane.

Earth is an elemental element that is primarily aimed at protection and mobility, nevertheless, the same element grants the player an increase in damage done. It should be noted right away that the element of earth is largely superior to other elements when it comes to destroying all kinds of barriers in the open world of the game. The earth has a similar ability to “Whirlwind” – “Crystallize”. Thanks to this ability, you can create a special barrier around your character that significantly reduces the damage inflicted by opponents. What about your attacks? Well, every hit with the use of the element of earth has a chance to crystallize the enemy and reduce his magical power, plus fragments can fly out of the enemy, picking up which you will increase the strength of your barrier.

Effects and reactions of elements among themselves

That’s right, your hero can only be controlled by two elemental elements, at least for now. However, as we said, this does not apply to your companions. Let’s take a look at the basic effects and the most interesting combinations of elements!

How to increase the level of friendship with a character in Genshin Impact?