Helpful Tips for Newbies to The Elder Scrolls Online

The Elder Scrolls Online is far from a new game, but it still manages to attract new players. Did you like TES Online? Then you have come to the right place, because today we will share useful tips that will be useful to any player who has just begun to immerse himself in the universe of multiplayer “scrolls”.

It is important to note that The Elder Scrolls Online is an MMORPG game. Simply put, to become a really strong player in it, you have to spend hundreds or even thousands of hours on it. In this article, we will introduce you to both the most basic and more advanced game mechanics. However, you will have to learn the intricacies of this game on your own – no guide can bring you hours of experience!

So, let’s start with the basics … 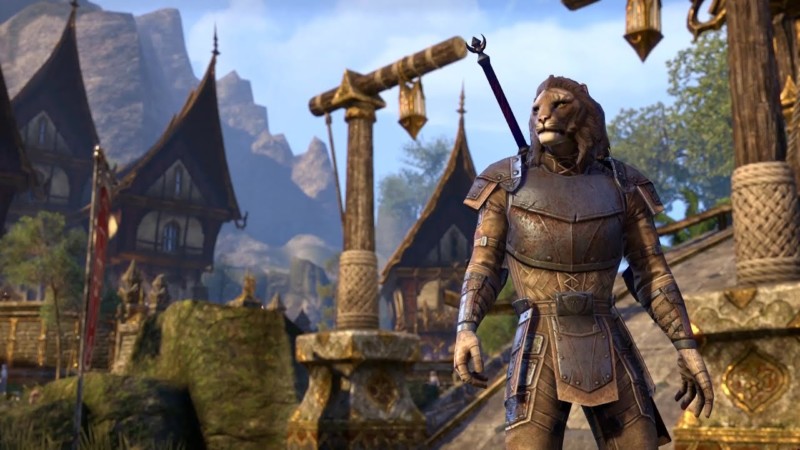 The basics of the gameplay

And where, in fact, to press something?

It is worth touching on the standard layout … it is a little lame. Fortunately, TES Online has an option to remap the control keys. Here’s what we recommend you do:

Creating a character in The Elder Scrolls Online is fun and easy, thanks to a feature-rich character editor that greets players at the start of the game. Perhaps the most important thing when creating a character is the choice of race and class. There are no restrictions between races and classes – you can choose whatever you want, any combination. However, it is always worth remembering about the passive class bonuses that are activated upon reaching the maximum class level, as well as about the characteristics. One way or another, create a character that will be interesting for you to play, because this is the most important thing.

When you upgrade your character, the game gives you special rewards. They will be useful to absolutely any player, be it a beginner or a veteran. What awards are we talking about? The rewards are extremely interesting – for example, at the tenth level, the game will give you a horse, and at the fifteenth, the opportunity to use a second weapon in battle. Simply put, this is not a bunch of some useless currency, but real content.

The brightness of the display of opponents

Go to the game settings and set the “Enemy brightness” parameter to the maximum. Thus, you will always be aware of where and who is around you.

By default, character skills are automatically hidden in the user interface if they are not used for a long time. Nice feature, but it can get in the way in situations where you need to react quickly. Who knows, maybe you forgot what skills are available to your character. 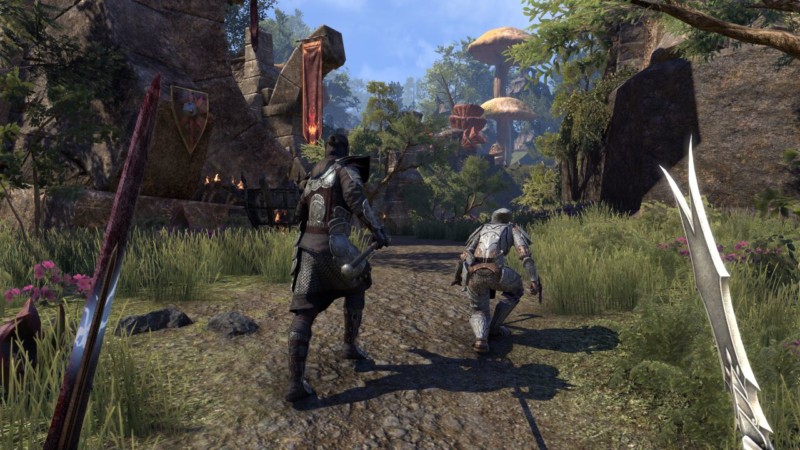 Once in your very first city, the first thing you need to do is find an NPC belonging to one of the three starting guilds, talk to him and take a task to pump the skills of the corresponding guild. The following guilds are available for beginners in The Elder Scrolls Online:

In The Elder Scrolls Online, there are many ways to gain experience to upgrade your character. Story missions, achievements, challenges and farming (killing mobs) – for all this you will receive valuable experience. We advise you to immediately take on the story missions, because you will receive a whole ton of experience for completing them. In the interval between plots, engage in the extermination of all kinds of mobs. Be aware that at the very beginning your character will not be able to “feel comfortable” in some regions of the game world. For such areas, you need to have a high level and a certain set of skills. Let’s tell you a secret: the most elementary pumping method is the destruction of dolmens.

What skill points are awarded for

The character’s skills are upgraded using skill points. It is logical. Skill points can be obtained for completing story and area missions, as well as through sky shards. Heavenly Shards are special items that are scattered throughout Tamriel. Finding three Heavenly Shards will give you one skill point.

Regretted your chosen skills for your character? The build turned out “not very”? No problem! You can easily reset all skills and get back the spent skill points by using the appropriate paid service in any city.

What to do with the skills …

If you are still struggling with your choice of skills, then we advise you to use the help of a skill advisor. You can use this advisor throughout the game. Let’s say you pumped your character to level 15 and don’t know what to pump him next – the advisor will give you a couple of options about skills and morphs. If you know perfectly well what you are doing, turn off the system. However, we recommend that you leave the advisor system enabled for all players who are just about to start playing The Elder Scrolls Online.

At the beginning of the game, a very small number of skills will be available to you. However, as the character performs certain actions, you can gain access to more skills. How do I unlock skills? Kill mobs with different types of weapons, equip armor, visit places to create items, and so on and so forth. The game will tell you what needs to be done to open certain branches of skills, so you don’t have to worry that you will have to endlessly sit in the TES Online wikipedia (although this is not without it).

It is important to note that the skill leveling, as a rule, will only start if you add it to the quick access panel. That’s right, we rotate the equipped skills in order to systematically pump them. There are, of course, exceptions, but this is the case with most skills.

The main way to deal damage to your opponents is with light and heavy attacks. Depending on weapons and skills, these attacks can deal not only simple damage, but also enchanted / elemental. To always emerge victorious from fights, it is important to combine your light and heavy attacks with the available skills. For example, L + L + T + N + T and other similar combinations.

Some battles, of course, can be won with attacks alone, but your lifespan in this game will be extremely short if you do not use the block. Unfortunately, the block does not protect you from all damage, but only from n%. In addition, you cannot hold a block indefinitely, because it depletes the character’s stamina bar.

Some attacks are impossible to block, and therefore you will have to regularly dodge, whether by double-pressing the movement keys (WASD) or any other key you specify in the game settings.

As we have already discussed with you, players can use light and heavy attacks, as well as interrupt, if appropriate. But what about damage types? The Elder Scrolls Online has the following damage types:

Yes, there are a whole bunch of different types of damage that need to be constantly monitored during gameplay. For example, some opponents will be vulnerable to fire or electrical damage, while others will fear Oblivion damage. By the way, the same applies to you!

Crafting (or “crafting”) is one of the foundational gameplay mechanics in The Elder Scrolls Online. There are tons of different branches in crafting. For beginners, we recommend that you pay attention to such branches as blacksmithing, woodworking and clothing, because from you, for the most part, you are required to disassemble certain objects into parts. Enchanting is another interesting branch, pumping of which is carried out through disassembly and creation of glyphs. We also advise you to look at the craft branch responsible for cooking food. 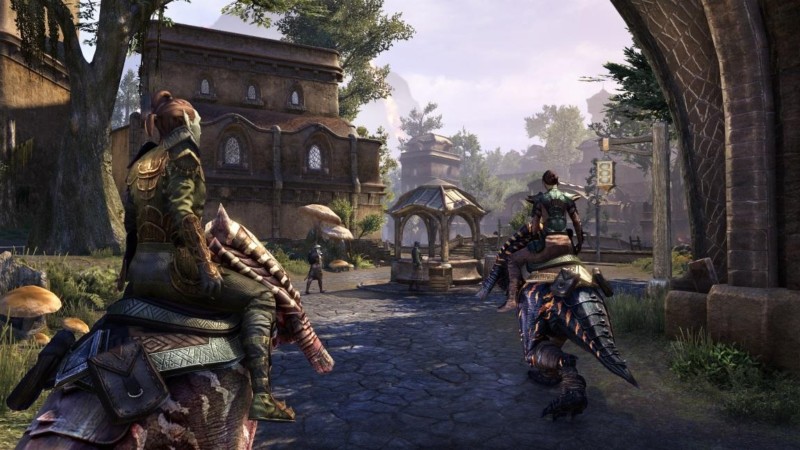 As in any other MMORPG, players can collect various items, which, of course, are stored in their personal inventory. 60 slots is the initial size of any character’s inventory. That’s enough, right? Unfortunately no, 60 slots is not such a big inventory. Fortunately, you can increase its volume by purchasing the corresponding improvement. The maximum possible amount of inventory in TES Online is 200 slots. However, many players feel quite comfortable at around 90 cells.

In addition to inventory, players can put their personal items in a special storage. This will help you free up space in your inventory without throwing away valuable items. Plus, the storage applies to all characters in The Elder Scrolls Online, which is undoubtedly very convenient. But here we come to a not very pleasant aspect: the price. How much will it cost to upgrade inventory? Well, let’s take a look at the price list:

In general, it becomes clear why most of the players stop at 70-90 inventory slots. In the future, the purchase of additional cells becomes extremely costly. Stop, what about the previously announced 200 cells? To achieve this amount of inventory, you need to get a horse with saddlebags, but it will also have to be pumped.

Expanding your inventory is an extremely slow process that can take hundreds or hundreds of hours of real time. Our tip: just play and don’t get stuck on endlessly expanding your inventory. It’s also important to note that with an ESO Plus subscription, players can get a separate crafting bag, storage expansion, and a bunch of other nice bonuses.

What are Champion Points?

As soon as you get one of your characters up to level 50, he will receive the so-called “champion points”. In fact, this is the equivalent of raising the level, i.e. the more of these points your character has, the stronger he will be. Champion Points are part of The Elder Scrolls Online’s endgame, so you shouldn’t even think about them at the outset.

How to get the Firebrand blueprint in Call of Duty: Warzone