There is a whole bunch of different skills to be found in Wasteland 3 and they are all divided into four categories:

A skill from any of the above category can be pumped to the tenth level, without exception. The so-called “skill points” (SP) are responsible for pumping skills. To bring the skill to the maximum level, the player will need to invest in it about 28 skill points. Simply put, with an increase in the level of skills, the requirement for the amount of HE also grows. Therefore, do not rush to use special books that you may stumble upon while exploring the wastelands. Reading such books at the first levels is a waste! 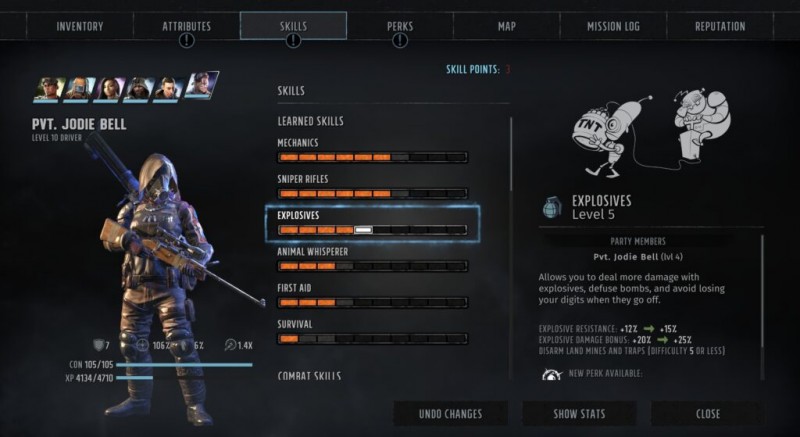 With the help of the training skill, you will be able, correctly, to train wild animals and make them your companions. Unfortunately, only one animal can be trained, plus it can easily die during the battle. Animals are divided into two categories: combat and non-combat. Combat ones will attack your opponents, and non-combat ones will give you passive bonuses. At the third level of the “Trainer” skill, the damage of combat animals increases, at the fifth level, the power of passive bonuses of non-combat animals increases.

This skill makes a real sapper out of the hero, allowing him to clear mines and stretch marks.

By pumping the “First Aid” skill, you will increase the effectiveness of various medicines. In addition, after lifting a friendly NPC to its feet, you will be able to deal 100% more damage to your opponents, but, however, only for 2 turns.

“Sly” allows the hero to deactivate alarms at the level and increase the time of his detection by enemy forces (by 0.3 seconds at each skill level). Also, this skill will delight the player by raising the damage inflicted from a hidden position. And at the 10th level “Sly” you will have access to a special talent that can increase the damage from stealthy attacks by as much as 200%.

“Modification of armor” is a skill thanks to which the player will be able to install modifications of one level or another into his armor (it all depends on the leveling of the skill itself). At the tenth level, access to the talent opens, which increases the armor of all allies within a certain radius of the hero by 5 units.

The same as the above skill, but only applies to weapons. The third level – dismantling weapons gives 15% more scrap metal. Fifth level – you find 25% more ammunition.

Allows the player to hack almost everything that is closed from him. Just imagine how much good there was in that safe that you passed by because you did not have the skill of picking locks? Or remember that closed door? In such a game, such a skill is vital. As a reward for each successful hack, the hero receives valuable experience.

The “Know-it-all” skill will help during hacking of all kinds of equipment, for example, terminals and bots. By the way, the latter after hacking can join your squad as temporary allies. Why temporary? Because at the end of the battle, these guys self-destruct. At the third level, you can take a talent, thanks to which your robots will distract the attention of enemies. Fifth level – robots can do electro damage. Seventh level – robots receive two additional action points.

Having acquired the “Working with mechanics” skill, your hero will be able to inflict bonus damage to robots, synths and vehicles. The skill allows you to restore generators, and the effectiveness of repair kits increases with each new skill level by 3%. The third level – increased damage to robots and vehicles by 20%. Fourth level – your turrets and drones do 25% more damage. Seventh level – the hero receives 5 additional units of armor after repairing robotics.

As the name suggests, you will be able to repair toasters. For repairs, you can get a variety of loot, including spare parts for the golden toaster. The third level is a bonus to the received loot for repairing toasters. Fifth level – toasts … Seventh level – fire damage is increased by 25%. Tenth level – absolutely all attacks of your character will inflict fire damage and set fire to opponents.

When moving around the world map, the “Survival” skill will help you avoid encounters with mutants, bandits and wild beasts. Sixth level – damage to animals and mutants is increased by 20%. The tenth level – the entire map of the game world is fully revealed.

Both of these skills will come in handy when talking with certain characters, to help you benefit from or avoid a battle. Iron Ass is bullying and Licking is sucking up.

With the “Barter” skill, you will be able to sell more expensive and cheaper to buy all kinds of goods. Third level – 20% discount on the purchase of several identical items. Seventh level – 5% chance to sell an item 5 times its normal cost.

By pumping the Leadership skill, members of your squad will receive bonuses for multiple kills of enemies, for example, + to defense, damage, critical attacks, accuracy and much more. Third level – squad members who are within a radius of two cells from the hero receive two additional action points. The fifth level – the chance of hitting you is reduced by 35%, plus the chance of hitting you with critical attacks is reduced by 25%. It all works for three turns.

There isn’t really much to tell about combat skills. We pump one skill and select a gun of one type or another for it – it’s just a business. As for talents, select them according to your personal preference. Combat skills are much easier than skills from other categories.