What to do if the computer gets very hot in Valheim?

The Valheim world is very young, but it has already gathered an incredible community of gamers around it. This is a great opportunity to fully immerse yourself in virtual adventures. The main genre of the game is survival, so gamers have to spend a lot of time here. The process of gathering resources, building and crafting takes a lot of effort, requires perseverance and attention to detail. Since the game was released on PC, most of the gamers use their productive hardware. The graphics are quite high quality and rich in visual effects, so a good video card is required for a comfortable passage. Nevertheless, players began to notice that it was in Valheim that their computer heats up to critical values. The reasons may be different, but this cannot be ignored.

First of all, you need to assess the capabilities of your equipment. It often happens that the performance of the video card and the central processor is not enough for a normal game. But users, ignoring this, install the release and run it with fairly high graphics settings. As a result, the GPU is at maximum load, but its cooling system cannot cope with the work. If the problem is in your hardware, then you need to lower the graphics settings, or even think about upgrading your computer.

The developer indicated the following minimum system requirements so that you can play comfortably:

If you have analyzed your system and realized that it does not meet the minimum requirements, then you should think about an upgrade. If it meets these criteria, or if its performance is an order of magnitude higher, then you should try to solve the problem using the methods below.

Method 1: use the Vulkan API

After the game was updated to version 0.146.8, the ability to run it with the Vulkan API became available to gamers. Many have tried this launch mode and noticed that the frame rate increased significantly during gameplay. This is a special patch from the developers that allows you to remove some visual effects, but at the same time increase stability and smoothness. After minor visual effects are turned off, the GPU will not be under 100% load, the cooling system will cope with its work, and the heating will decrease.

The Vulkan feature can be selected during the game download phase via Steam, now a selection of modes is provided during the process. But if you want the application to always start like this, then follow these steps: 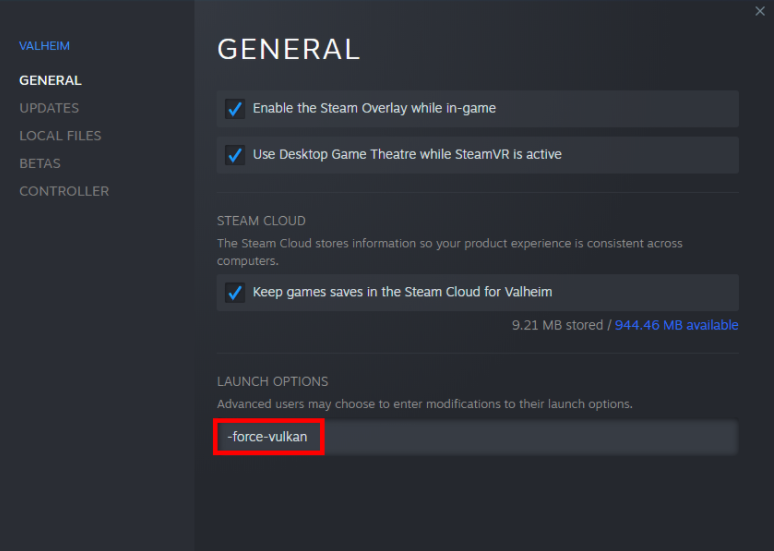 Now, when starting Valheim, the program will use the Vulkan API rendering, which will allow you to enjoy the gameplay. If after these steps you do not notice any difference, then you should make sure that the 0.146.8 patch has been installed. Earlier versions of the game do not support this mode. It should also be remembered that the Vulkan API is currently under development, which may lead to a crash from the application or other loading problems. If so, then go to the settings and remove the previously entered command to start in standard mode.

Your monitor has a certain refresh rate of the picture, if the video card produces a higher value than the monitor can handle, then gaps will appear. The gaps in the picture during the gameplay do not contribute to meeting the needs of the gamer, so the VSync technology was developed. Vertical sync allows you to align the frame rate (FPS) with the screen refresh rate. But sometimes it is this function that consumes a huge amount of processor resources, which leads to excessive heating. Many users on the forums say that disabling VSync caused the GPU temperature to drop by 10 degrees Celsius, which is a lot.

To disable Vsync technology in Valheim, follow these steps: 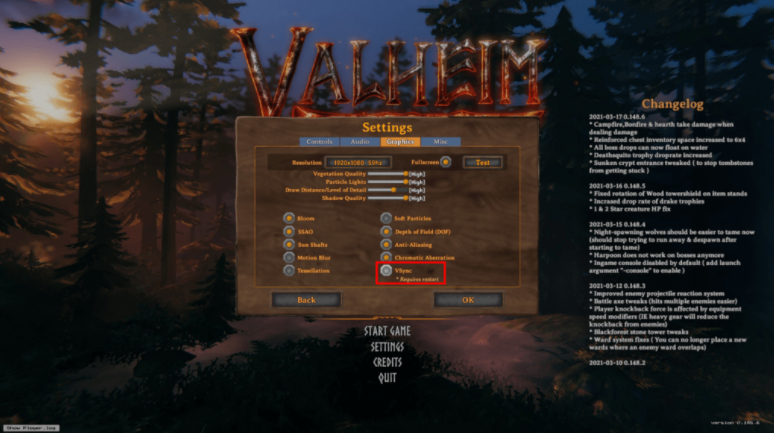 After that, you will notice that the heating of the graphics and central processors has decreased. If the picture breaks in the game, and you notice that it is worse without vertical sync, then you should set this parameter back. In this case, you need to seriously think about upgrading your computer or cleaning the cooling system.

TOP 5 most memorable heroines in games on PS

How to fix no sound in Evil Genius 2 on PC?